A farm manager has paid a glowing tribute to Sir Ken Morrison, who was instrumental in growing the supermarket chain Morrisons.

The former chairman of Morrisons died aged 85 on 1 February following a short illness. He is survived by his wife Lynne and by three daughters, two sons and five grandchildren. 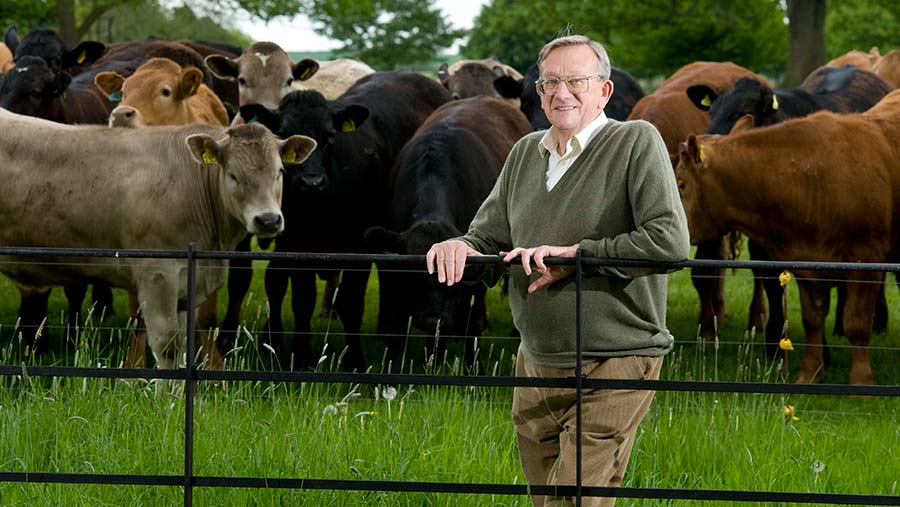 Sir Ken is widely lauded as a remarkable retailer who helped build Morrisons into the retail empire it is today.

He joined the family business in 1956 and helped build his father’s chain of small grocery stalls in Bradford into the UK’s fourth-largest supermarket.

Sir Ken was also a keen farmer, an NFU member and a passionate supporter of British agriculture.

He ran a herd of 1,000 cattle and a flock of 300 Texel-cross and Mule ewes at Myton Hall Farms, a 1,100-acre arable enterprise at Myton Hall, near York, North Yorkshire.

“He was here every day looking round the cattle and walking through the lambing shed at lambing time – talking to everyone and keeping up to date with what was happening on the farm,” Mr Pennock told Farmers Weekly.

“A lot has been said in recent days about the way Sir Ken talked to everyone in the same way and this was true. He spent time talking to me and the other staff members on the farm – not just about work, but about the things we were interested in.

“He shared a love of football with our cattle man and they often joked with each other about their respective teams’ poor performances.”

Mr Pennock described Sir Ken as a perfectionist with an incredible eye for detail, who was always looking for ways to improve the business.

Although Sir Ken was not born or brought up in the technological age, he always took an interest in new developments and technologies, added Mr Pennock.

“I respected and admired the way he embraced new technology that would improve efficiency and productivity on the farm.”

Mr Pennock said he was grateful to Sir Ken for allowing him to undertake three months of travel, visiting businesses across the world related to the beef industry after he was awarded a Nuffield farming scholarship in 2014, sponsored by the Yorkshire Agricultural Society.

“For many employees, it would be extremely difficult to take such a large amount of time away from the business, but Sir Ken gave me his wholehearted support throughout the process,” he added.

“He was a great support to his staff, encouraging us to take up opportunities to further our personal development.”

Mr Pennock said he was privileged to work for Sir Ken and learned so much from him.

“As well as being an incredibly knowledgeable businessman, Sir Ken was also a kind and caring person, with a lot of wisdom and a great sense of humour. He was such a big part of life on the farm and we will all miss him very much.”

“I’m just taking money off people and giving them something in return.”

“If you don’t know how to run your own business, it’s time to give up, isn’t it?”

NFU president Meurig Raymond said: “Ken’s death is a sad loss and we send our sincere condolences to his family and loved ones.

“Ken was a strong supporter of British agriculture, an NFU member and keen farmer after his retirement. He will of course be remembered as a successful businessman who helped build up Morrisons to become the UK’s fourth-biggest supermarket chain.”