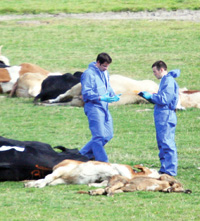 A project to investigate vaccinating against foot-and-mouth is being launched as part of a £13m project to halt the crippling effect of livestock disease.

The Biotechnology and Biological Sciences Research Council and the Department for International Development will together bring scientists from around the world to tackle the threat of disease.

Scientists hope by investigating diseases such as F&M, bluetongue and African swine fever, they can reduce the number of farmers whose livestock are hit by illness and help secure food supplies.

It is estimated that half of potential turnover from the livestock sector is lost to disease in developing countries, while it has cost the UK economy more than £15bn over the past 15 years.

The series of projects, launched in London on Monday (15 February), aim to find better ways for farmers to protect their livestock, as well as developing vaccines for disease.

“This will not only transform the lives of millions across the developing world, but also generate a more stable livestock infrastructure globally for the benefit of us all,” he added.

Lord Drayson, Science and Innovation Minister said: “This collaboration demonstrates the UK’s determination to share our world-leading science in the search for improved treatments and diagnostic tools in animal health.

“Animal disease is a deadly threat that leaves no corner of the Earth untouched. This research will allow communities to protect food chains and economies at home and in developing countries.”