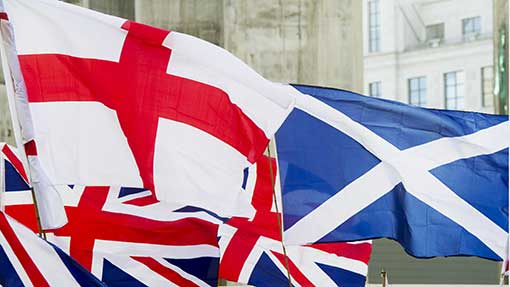 A survey of farmers in Scotland has suggested that almost three quarters want to stay within the UK.

The National Farm Research Unit carried out a phone survey across April, May and June interviewing a representative sample of farmers in England, Scotland, Northern Ireland and Wales.

Of the 2,497 farmers polled, 529 were from Scotland and 72% of these said ‘no’ when asked ‘Should Scotland leave the United Kingdom?’

The survey found 10% of Scottish farmers did want Scotland to be an independent country and 18% of producers indicated they were undecided about how to vote.

Although not eligible to vote in the referendum, 63% of the farmers from Northern Ireland, Wales and England said they would like to see Scotland remain part of the UK.

Jim Williams, managing director of the National Farm Research Unit said: “Even allowing for a 5% confidence interval in the data, this survey sends a clear message from the farming community that farmers across the UK, and particularly Scottish farmers, want Scotland to stay part of a united kingdom.”

See also: Scottish independence: To stay or to go