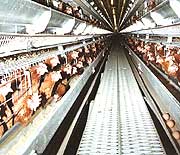 ADAS has announced that it will be ceasing poultry research from the end of September 2007, but it will retain its poultry consultancy service.

This follows news in February  that ADAS was also closing its pig research site at Terrington St Clement,

It confirmed in a statement that following a strategic review of its livestock R&D activity, ADAS had decided to withdraw from its poultry research site at Gleadthorpe, Nottinghamshire.

The decision follows a period of negotiation with the landlord DEFRA, from whom ADAS has rented the site since privatisation in 1997.

Under the terms of the agreement, the poultry research unit will be sold with vacant possession during the course of 2007.

ADAS will continue to undertake other livestock research on four sites, which are at High Mowthorpe in , Arthur Rickwood in Cambridgeshire, Pwllpeiran in Ceredigion and Drayton in Warwickshire, as well as on its deer unit at Rosemaund in Herefordshire and on commercial farms.

Group managing director Colin Speller comments: “We regret the loss of our poultry research capability, and the decision has been taken purely on commercial grounds, due to a decline in research throughput.

“However, we are consolidating our poultry strategic consultancy and policy delivery capability, where we are experiencing a strong and increasing demand for our expertise.

He added: “In particular, we shall retain our in-depth regulatory expertise and will continue to advise on protocol design, dossier preparation and submission for health product registration purposes in poultry and other species.”