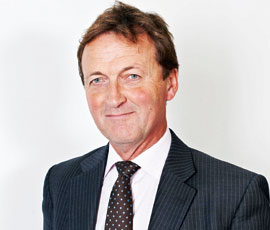 The Lib Dem agriculture spokesman and MP for St Ives and West Cornwall insists he is having an impact on farm policy, despite not being part of the DEFRA ministerial team. He talks to Caroline Stocks.

You have been arguing for a retailer ombudsman for years as chairman of the Grocery Market Action group. Do you think it will it ever happen?

I am pleased that progress is being made, but I have been at it for 12 years and it’s been a process of very slow attrition. It was a lot of work to get MPs on side because they were sceptical of over-regulation, but this is a regulation which is essential.

We are talking about suppliers and farmers being pushed to the margin because of the pressure being put on them by over powerful supermarkets using bully-boy tactics.

I know how the incentivised system works and buyers have been just screwing suppliers to the floor. While regulation isn’t about price-setting it’s to do with other aspects of the contract and the way suppliers were trading.

How close are we to seeing a watchdog being introduced?

On the Civil Service side, it feels as though there’s some reluctance to act. We have seen further consultation and ended up with a proposal which is being consulted on again.

I have been pushing for the government to agree to go straight for a Bill, but it’s not scheduled to be pushed through in this parliamentary year – which means it won’t be looked at until the end of 2012-13.

If the civil servants get their way they won’t prepare the architecture of the Bill so we are then looking to 2014. It’s unacceptable.

We look as though we don’t understand the urgency of the matter. Supermarkets are creaming it while farmers are going to the wall and those things are not unrelated. Every week the government fails to act, farmers are finding themselves in more difficulty.

What can you do to speed up the process?

I have to make sure there is very strong support for the government proposals. The government needs to be put under pressure to recognise that this is a measure that has cross-party support. I am also having discussions with the leader of the house to make sure they are properly raising the issue to find the time to discuss it.

In my role as a quasi-DEFRA minister I have also been trying to be “coalitionised” and have meetings with Jim Paice and DEFRA secretary Caroline Spelman to help push the issue.

We will be giving it a strong push in the autumn – the pressure is definitely on.

You have been critical of the government’s proposal to introduce a pilot badger cull to tackle bovine TB. What are the problems with the plans?

I wanted the government’s proposal to be science-led. I want to be sure we have a proper opportunity to assess the pilots for effectiveness and humaneness.

The thing I fear most is a methodology that plays to the concerns of the anti-cull community, but also makes the situation worse. That is the worst of all scenarios.

If I’m convinced that DEFRA will achieve the outcome, the level of effectiveness and a system that is likely to be beneficial, then that is all well and good. But it’s completely untried.

What should be done instead?

Seven years ago my proposal was not to identify 150sq km areas, but to pick areas that have integrity topographically, such as water boundaries. Once you have found those, you should identify key stakeholders including wildlife experts, vets and farmers, map the area and give them a range of tools – culling being one of the options.

I’m not squeamish about culling badgers, I backed the Krebs trial in my own area and ran the gauntlet of animal rights protesters. I took the rap for a lot of farmers.

What we don’t know about the current plans is whether we can identify areas of compliance that would be sufficient. But when – not if – the pilots go ahead, we will know within weeks rather than months if it is working. Mapping an area and getting an honest assessment of whether it’s effective will be Natural England’s responsibility.

Natural England said it was concerned about the farming community being able to conduct the cull effectively. Do you agree?

Natural England has a tremendous amount of experience. They are not ignorant of what’s going on in the English and Cornish countryside. But I don’t question the commitment of farmers to ensure it works and that’s a very significant factor in ensuring success. Farmers recognise it’s not just free-range shooting from the hip without safety measures. It’s responsible, professional, compliant systems, undertaken by people who understand the countryside.

Are there any other issues over which you clash with your coalition partners?

I’m very encouraged by the relationship I have with the Conservative DEFRA team.

The two most significant things are the proposals on bovine TB and sticking to the coalition agreement. The other thing is scrapping the Agricultural Wages Board. I don’t disagree with scrapping it, but protecting agricultural workers is my concern.

Despite the differences, I haven’t had the door slammed in my face or gone off in a tantrum – we are keeping discussions going. They know I have one opinion and will keep an open mind. We acknowledge our different positions and we are working towards a compromise.

DEFRA is one of five government departments without a Lib Dem minister. Are you confident about your input to agricultural policy given you’re not on the ministerial team?

I could always do with more. The problem for an MP without the resources of a minister and special adviser is that it’s often a resource problem that prevents me from having more input. Some of the communication could be better and I could be doing with more notice on some issues. They acknowledged that they sometimes failed and they said they won’t do it again.

Caroline Spelman has faced some criticism since she has been in the DEFRA minister role. What do you think of the job she has done so far?

I support her and I think she’s had a tough time. I’m going to defend her actually.

She has the problem of being a minister of a department that, unfortunately, Number 10 sees as a subsection of itself and wants to micro-manage. Equally, she finds her hands tied by an over-bearing Treasury. She handled the apology [over forestry] with good grace. She should be given another chance.

Do you agree with the line she has taken on debate around reform of the Common Agricultural Policy?

The path the government has taken in the CAP negotiations is sound and Pillar 1 (direct support) should remain. Clearly, in time, we need to take a look at the whole thing, but it’s a sound conclusion DEFRA has come to.

Sadly, the DEFRA negotiating position has often been hamstrung by the Treasury. It didn’t help because the Treasury and a number of Conservatives objected to the rebate, which means that the DEFRA negotiating position is constantly compromised. It’s like going in with a massive, flashing neon arrow pointing at your Achilles heel and telling people in Europe: “If you want to push us into a corner, this is how you do it”. I don’t think we should jettison the rebate.

What do you think of European plans to “green” direct support by putting 7% of farmland under environmental measures?

The greening of the CAP makes sense. It’s always been my view that providing public goods, which includes environmental outcomes, can sit hand in glove with productive agriculture.

Unless we have a free market that says farmers can clear out hedges and rights of way and create prairies and ranches, then we have to compensate farmers for the environmental impediments we put in their way. But to come and say we demand you use this idiotic instrument of set-aside is inexplicable and barmy.

I hope that we will negotiate quite hard on that. There are other ways of achieving strong environmental outcomes.

Andrew George in a minute

Favourite place in the British countryside?
Penwith Moors in Cornwall, which is part of my own constituency

Last time you were out on a farm?
Last week – I was at the Nankervis farm in Wicca.

How do you relax?
I play a lot of sport. I play cricket quite seriously and football and rugby occasionally, but I’m horribly accident prone. I’ve broken my leg twice, as well as my ankle and wrist.

Facebook or Twitter?
Neither. I have an iPhone, but I don’t use any apps on there other than sending messages. I’m not into Twitter at all, it’s rather self-indulgent.