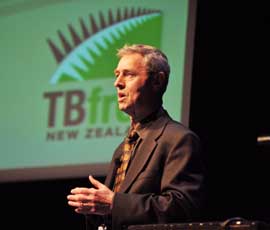 Farmers Weekly asks how EU policy influences the UK’s Bovine TB control strategy and discovers how other countries have tackled the disease.

Co-operation between the farming sector and central government is the cornerstone of New Zealand’s world-leading bovine tuberculosis (TB) control programme.

When the number of TB-infected herds was on the rise in the 1980s, government and farmers collaborated to form the Animal Health Board (AHB) – now one of the country’s most successful private-public partnerships.

This success is due to farmer involvement in the TBfree New Zealand programme and the fact that they contribute a substantial amount of funding to control the disease. Another contributing factor is that the AHB was set up for a single purpose – to control bovine TB.

Together, central government and the farming sector developed the national TB control strategy, which set the benchmark for managing the disease throughout the world. Since its implementation, the number of infected herds has fallen to fewer than 100.

However, the disease wasn’t always effectively managed in New Zealand. It became a major financial threat to the country’s farmers in the 1970s and ’80s. At the time, a TB control programme was put in place, but the disease continued to infect cattle and deer herds with no obvious explanation.

The missing link was the introduced Australian brush-tail possum, which maintains TB in its population and spreads the disease to farmed cattle and deer. Infected possums were found to inhabit around 38% (10m hectares) of New Zealand and analysis indicated they were responsible for up to 70% of new cattle and deer herd TB outbreaks in these areas.

This was evident in the mid-1980s to early ’90s, when bovine TB posed a major risk to the value of New Zealand’s high-quality beef, dairy and deer products. During this time, the number of infected herds reached more than 1,700.

The situation began to change with the development of the national TB control strategy and the AHB’s network of 15 regional TBfree committees. The committees are made up primarily of farmer volunteers and local stakeholders, who communicate, advocate and support the delivery of the strategy in each region.

Historically, the strategy aimed to curb and slightly reduce the number of infected herds, but a lack of resources for controlling TB in wildlife meant the disease continued to spread in the possum population.

The strategy was revised to include more wildlife control and the approach proved a huge success. While a small number of New Zealanders oppose using toxins to control introduced pests, the reality is that these imported predators not only spread TB, they also destroyed native plants and birds.

The recently updated TB strategy will employ aerial possum control and extensive ground-based work using toxins to eradicate TB from possums across 2.5m hectares, or 25% of the area identified as containing infected wildlife.

By Angela Robinson, Department of Agriculture Fisheries and Foods, Ireland

The bovine tuberculosis eradication programme in Ireland commenced in 1950 and became compulsory throughout Ireland by 1962.

Bovine TB is a relatively complex disease and it is not possible to attribute the decline in the incidence of the disease to any single factor. Nevertheless, our experts are satisfied the main factor involved would appear to be our badger removal policy, which has been in place for 15 years or so and which was considerably enhanced with effect in 2004. Under this policy, badgers are culled under licence from the Department of the Environment where they are implicated in a TB breakdown. There has been no significant opposition to this policy.

The objective of the badger removal strategy is both to reduce the incidence of TB in wildlife and the opportunities for contact between cattle and wildlife. However, the long-term objective of the department is to develop a vaccine for badgers and considerable research has been conducted in collaboration with DEFRA on the development of such a vaccine.

If our objective is achieved, the introduction of a national badger vaccination strategy will be introduced and this will reduce the need to cull TB-infected badgers as TB levels fall in both cattle and badgers. It will be some years, however, before any vaccine is available and, in the meantime, existing strategies, adjusted as appropriate in light of disease trends, will be broadly maintained.

The department’s policy on TB, including its policy on wildlife, was drawn up in association with the social partners, including the farm organisations. In addition, farmers have been contributing towards the cost of the TB eradication scheme since 1979 through the payment of disease levies on cattle slaughtered or exported live and on milk deliveries to creameries. The revenue from the levies amounted to €5.5m in 2010. In addition, farmers pay for most of the testing. In general, farmers pay for one test every year, except in the case of an outbreak of TB, in which case the department pays for the test.

Clearly, the objective of our eradication programme is the eradication of TB. However, in view of the existence of the reservoir of TB in the badger population, it is recognised that this will not be possible until a badger vaccination programme has been put in place. In the meantime, our objective is to reduce the incidence of the disease as much as possible so that eradication can be rapidly achieved once a badger vaccination programme is introduced. Considerable progress has been achieved in reducing the incidence of TB in recent years and it is hoped that this progress will be maintained into the future.

The high prevalence of bovine TB in the UK not only has a huge direct effect on our farmers, but also places a stain on our international reputation as a farming nation, making buyers wary of importing beef and dairy products from the UK.

Bovine tuberculosis is a long-term epidemic that shows no sign of abating in this country and has instead increased year on year in England affecting 6.3% of cattle herds in 2009.

This has resulted in 24,500 cattle being slaughtered to control the disease – 15,770 of which were on farms in the south west, which has taken the brunt of this disease.

It has also caused huge emotional and financial strain on farmers whose herds have to be regularly tested, controls put on their movements and sometimes infected animals culled.

Attempts to control the disease to date have failed, resulting in an unacceptable number of cattle being culled each year and has cost the taxpayer £63m in 2009/10.

The government has been under increasing pressure from our European neighbours and from the European Commission to not only control the disease and ensure border biosecurity, but to eradicate it.

In 2008, while still an MEP, I met with the EU health commissioner, who had just offered an ultimatum to the British government to submit plans to eradicate bovine TB or face the withholding of funds to DEFRA.

That is why it is vital the coalition government continue to tighten on-farm biosecurity measures, regulation of the movement of animals and equipment, and isolation of sick animals.

However, there is also urgent need to form a coherent and effective bovine TB eradication strategy. The removal of infected wildlife acting as a reservoir for the disease has to be a part of this to allow other measures to yield the expected results – something recognised by the European Commission for Health and Consumer Protection.

Farmers Weekly has set up a dedicated channel for all stories connected to proposals for a badger cull.

Don’t let your opinion go unheard – have your say on this topic on the FWi forums.