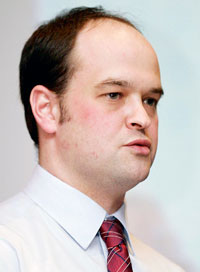 CAP reform is going to be a major feature of 2010, as Brussels engages in a wide debate about how the EU budget should be divvied up post-2013, and how agriculture needs to adjust to meet the challenges of the future.

Farmers Weekly will be keeping close tabs on things as they develop, and publishing a series of articles under the CAP 2013 banner, to keep readers informed as the key developments unfold.

Reform of the CAP is firmly back on the political agenda as the EU gears up for the next round of changes, scheduled for 2013. But why now, and what does it all mean? Economics editor Philip Clarke puts the questions to NFU head of economics and international affairs Tom Hind (pictured).

Why is the CAP being reformed yet again, when we’ve only just got used to the last one?

The CAP won’t actually be reformed until 2013, but the reason we’re talking about the issue now is because the EU Commission will come forward with an orientation report on the future of the policy in late 2010. With the adoption of the Lisbon Treaty, the way in which decisions on the CAP are made changes substantially in that the European parliament now has a full say on agricultural matters. This means that reaching an agreement on reform becomes a much longer process, so it has to start sooner.

So what is the timetable for reform?

We know that the EU Commission will produce its first report, or “communication”, in the autumn of 2010. After that we can expect legal proposals to be made in 2011 with the hope of having a reform agreed between the council of ministers and the parliament by the end of 2012. Personally I think this is optimistic.

How does this all fit in with the ongoing review of the EU budget?

There’s a very close relationship between the two. For the CAP to exist, it needs to have a budget and, at the same time as agriculture ministers will debate the reform of the CAP, finance ministers and heads of state will debate the EU budget to apply for the seven years from 2013 (the “Financial Perspectives”). We expect there to be intense pressure on the EU budget generally, and agriculture particularly. This will probably intensify because of the state of Europe’s economy and the fact that most governments will need to find substantial savings to pay for the massive economic stimulus that has been deployed.

What are the other main pressures on the current CAP?

Perhaps the biggest pressure is about the legitimacy of the CAP and the purpose of direct payments to farmers. Though more funding has been coming through the Second Pillar of the CAP (rural development), the bulk is delivered through the single farm payment. These payments serve to give farmers a degree of income stability, especially faced with volatile markets. However, there is also a strong view that direct payments need to do more to protect the environment, or be transferred into rural development policies. This is certainly the view of the British government.

What are the most likely changes that will come out of the reform?

At this stage it is hard to tell, but it seems likely that the value of SFPs will be affected due to the pressure on the EU budget and calls from the new member states to reduce the disparities in direct payment levels. For example, farmers in Latvia receive payments worth around k88/ha whereas in Greece they are worth over k500/ha. Some form of payment equalisation therefore seems inevitable, though I strongly believe that direct payments will continue after 2013 because they are seen as important by the vast majority of EU member states.

The outgoing agriculture commissioner, Mariann Fischer Boel has indicated that she would like to see more money transferred to rural development and to help stimulate “green growth”. She has also said that modulation (whereby direct payments are cut to fund rural development policies) should be abandoned as a funding mechanism.

What difference will it make having Romanian commissioner, Dacian Ciolos, overseeing the process rather than Mrs Fischer-Boel – always assuming he is confirmed in the role later this month?

It will not have a big impact. There has been a lot of hype about what changes a Romanian farm commissioner will bring to the position but frankly, as a commissioner, the individual should reflect the collective European interest, not that of any one country. Mr Ciolos’s remarks so far have been constructive, suggesting he will continue where Mrs Fischer-Boel has left off. Whoever the Commissioner is, he will face a massive battle to defend the scale of the CAP budget and to increase its legitimacy in the eyes of taxpayers.

What about red tape? The last reform was meant to lessen the burden but things seem to be worse than ever.

The last reform teaches governments a valuable lessen – to think carefully about implementation before determining policy. The decision taken by DEFRA in 2004 to go down the dynamic hybrid route of SFP did not properly consider the impact on delivery agencies in terms of establishing entitlements and so on. Consequently, the simplification gains that should have come from decoupling support payments have not been fully realised.

What other dangers do you foresee?

As well as the threats to the budget, the biggest danger is the risk of some further renationalisation of the CAP, both in terms of policy instruments, but especially financing. We saw many member states push for as much national discretion as possible during last year’s CAP “health check” and in recent weeks, several governments have resorted to state aids to give added support to their farmers. Such activities can lead to competitive distortions between member states. But these would be incomparable to the distortions that would occur if we were to see national co-financing of direct aids. We fear that UK farmers would lose out as the UK Treasury would not be keen to top-up direct support.

As well as the prospect of greater simplification, I tend to think that the outcome will strengthen the long-term legitimacy of direct payments. While we have fears about renationalisation, the balance of probability appears to favour a common framework. I also think there will be pressure to simplify and improve the operation of rural development programmes so that they deliver much greater added value to farmers than they do at the moment. I’m heartened by the declaration made recently by 22 EU governments in Paris in favour of a strong CAP. This recognised quite rightly that agriculture lies at the heart of many of the major challenges that society faces in the future, especially growing demand for food and climate change.

What are the NFU’s priorities for the next CAP reform?

We’re consulting our members and recently launched an online survey to gauge their views. I would encourage all NFU members who have something to say on the CAP to get involved via our website (http://www.nfuonline.com/websurveys/CAPSurvey/cap_survey.htm) or our regional offices.

There are some key principles that we fundamentally support. The first is maintaining a strong CAP and ensuring that the policy is as “common” as possible.

Having a simpler policy is also a top priority, both as regards the general framework agreed in Europe and the implementation model adopted in England and Wales. We are very wary of any direct payment scheme that uses farm size, turnover or some other woolly criteria as a basis for determining payment levels.

Third, we want a policy that is focused on the market. This not only means decoupling, but also ensuring that the EU concentrates on correcting the failings in the market, such as overbearing power from retailers or poor contractual arrangements like those in the dairy sector.

What is the NFU doing to influence proceedings?

We’re in regular discussions with DEFRA officials, ministers and the opposition parties on the future of CAP. A key message to them is that they must move away from ideologically entrenched positions, especially on phasing-out direct payments. This extreme position is doing real damage to the UK’s ability to influence debate on the future of the CAP. More importantly, we are in dialogue with the EU Commission which is the most influential body in terms of setting the agenda.

Want to find out more? The NFU has produced some useful background material for members which is available on the NFU website (PDF)