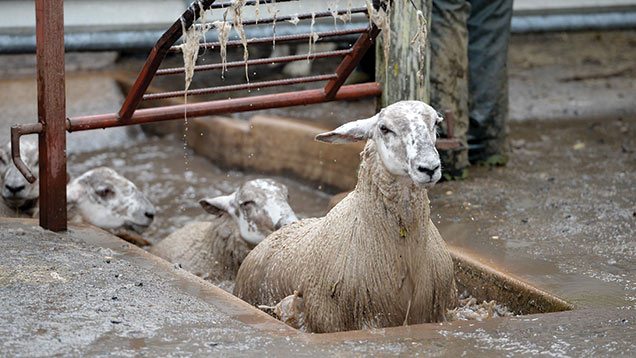 A Health and Safety Executive (HSE) report detailing concerns about farmers being poisoned by organophosphate (OP) sheep dip has been destroyed, admits the government agency.

Campaigners believe the document – dating from 1990 – could reveal how much the government knew about the likely effects of the toxic chemicals on human health. Farmers were required by law to use OPs to dip sheep until the 1990s – but many did so without protective clothing.

Sufferers of OP poisoning are now mounting a bid for government recognition of their health problems (see ‘There was plenty of dip splashing everywhere’, below). They are calling for an independent inquiry into the effects of OP sheep dip on the farmers and farmworkers who were forced to use it.

A newly formed Sheep Dip Sufferers Support Group is calling for better diagnosis and treatment for all those affected by OPs used in agriculture. The group held its inaugural meeting on Thursday 12 February, at Gisburn, Lancashire.

“We must have recognition for all those who have been bravely battling against the effects of these chemicals for decades.”
Tom Rigby, Sheep Dip Sufferers Support Group

Support group coordinator and Lancashire farmer Tom Rigby said he had submitted a Freedom of Information (FoI) request asking for the HSE document to be released. “There is no legitimate reason for keeping it confidential this long,” he explained.

“We must have recognition for all those who have been bravely battling against the effects of these chemicals for decades. These insecticides had a devastating impact and it is important those affected finally start to get the help and support they urgently need.”

But the HSE responded to the FoI request by telling Mr Rigby: “The information you requested is no longer held by the Health & Safety Executive, having been destroyed in accordance with HSE’s corporate retention policy.”

One consequence of the FoI Act was that information was regularly catalogued and “weeded out” – other than older papers relating to high-profile incidents, significant policy changes or long latency risks, said the HSE, which has now agreed to conduct an internal review.

Mr Rigby said: “The information I want is HSE advice given to the government minister just before he decided to abandon compulsory dipping and the science behind and date of a government order that Ministry of Agriculture, Fisheries and Foodvinspectors must not go within 14ft of a sheep dip.”

A Scottish MSP is backing calls for the full disclosure of any documents that could shed light on how farmers and crofters were affected by OP products.

Angus MacDonald, who is a member of the Scottish Parliament’s Rural Affairs, Climate Change and Environment Committee, is also supporting calls for an independent inquiry into events that led to farmers suffering long-term ill health effects.

The Falkirk East MSP, who was himself exposed to OPs on family farms outside Stornoway during the 1980s, said there were numerous examples of farmers and crofters becoming ill when it was compulsory by law to treat sheep with OPs.

“There are many people whose lives have been changed with ill-health, possibly through their use of OPs, and they deserve answers,” said Mr MacDonald. “Both the medical profession and the UK government must be made aware of these concerns.”

People affected by OPs while working in agriculture had become increasingly frustrated at the lack of recognition within the medical profession over the link between their ill health and their exposure to the chemicals, said Mr MacDonald.

“The UK government must commission an independent enquiry in the near future to look at who knew what and when over the past three decades, including full disclosure of any documents that could shed light on how hundreds of farmers and crofters have suffered over the years.”

‘There was plenty of dip splashing everywhere’

Paul Wright came close to committing suicide on his second attempt: “I’ve got a 20in neck, the rope snapped and I ended up in the river,” he says. “I look back and I know that it wasn’t really me doing those things.”

Now approaching 60, Mr Wright was brought up on a sheep farm at Burnley, Lancashire. Diagnosed with mental problems as a teenager, in later life he was told he had developed multiple sclerosis. But seven years ago it was suggested his symptoms were typical of OP poisoning.

“Sheep farmers were never made aware of the risks. We never gave it a second thought. You’d dip your own sheep and then go and help your mates. And believe me, getting big, Lonk sheep weighing eight stone into a dip always meant there was plenty of dip splashing around everywhere.”

“Sheep farmers were never made aware of the risks. We never gave it a second thought. You’d dip your own sheep and then go and help your mates.”
Paul Wright

Mr Wright had a blood test to see if OPs were the cause of his problems. “The test was positive and suddenly everyone’s attitude to my condition changed. The chemicals are continually attacking my central nervous system but at least I now know what I’m suffering from.”

Today, Mr Wright continues to ease the constant pain by taking what he describes as “a shed full” of medication every day. “I’m a big strong bloke but I have no strength to do anything,” he says. “I can’t even lift a bag of shopping.”