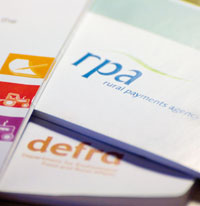 DEFRA is launching a full-scale investigation into the government agency blamed for some of the worst farming cock-ups in living memory.

The Rural Payments Agency being scrutinised in a bid to make it as “lean and efficient as possible” ahead of any changes to the Common Agricultural Policy in 2013.

The review, launched this week (2 September), will look at the way the agency distributes the £2bn of subsidies and environmental payments to 120,000 farmers in England each year.

It will identify areas for improvement, which may result in widespread changes to the RPA and its operations following the review’s completion in March.

DEFRA director general for food and farming, Katrina Williams, who is chairing the review, said every aspect of the RPA’s operations would be scrutinised to ensure there was a “solid basis” for any changes to CAP.

“The RPA has done a lot of work, but [we need to decide if] the way we work is the best way given we know there are some changes coming,” she said.

“We want to deliver payments in the best and most efficient way for the taxpayer and customers.

“I’m not ruling anything out, but we are aware that while we are doing the review we must not damage the service being given to customers.”

Ms Williams denied the review was being carried out in response to problems with the latest mapping exercise, which has seen hundreds of farmers receive incorrect data.

The latest mapping difficulties are the latest in a long lines of problems for the RPA, which has struggled to get single payments out on time to farmers since it first began operating in 2001.

Ms Williams said customer feedback from the RPA’s own satisfaction surveys would be incorporated into the review.

“It’s not a cynical PR exercise to make people love the RPA,” she added. “It’s a genuine piece of work to make sure the organisation is on a good footing.”

DEFRA was unable to confirm how much the exercise would cost, but Ms Williams said specialists would be needed for some areas of the review, meaning it would “not necessarily be a cheap exercise”.

The Country Land and Business Association welcomed the review, but said it had been too long coming.

Henry Aubrey-Fletcher, CLA president, said English farmers had been in the hands of “one of the worst agencies in the UK” and it was vital the review examined the reasons for the slow administration of the single payment.

“The review must also examine the relationships between the RPA and other organisations such as Natural England, the Environment Agency and local authorities in terms of how RPA decisions can affect work in other areas such as agri-environment schemes,” he added.