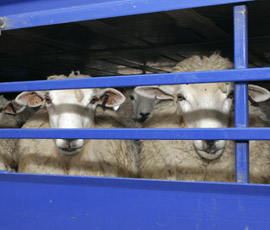 The government has ordered an inquiry into “unacceptable events” that saw more than 40 sheep slaughtered on the dockside at Ramsgate.

The chain of events started to unfold when a lorry carrying 500 sheep failed an inspection after arriving at the Kent port on 12 September.

Two sheep were put down due to injuries after the animals were unloaded from the lorry.

But what happened next remains unclear.

RSPCA representatives and officials from the Animal Health and Veterinary Laboratories Agency (AHVLA) are understood to be present as the sheep were unloaded.

The RSPCA says the floor collapsed in the area where the sheep were being held. “Six sheep fell into water and four were rescued but two drowned,” it said.

“A vet then inspected all the sheep and found that a further 41 were lame and so these animals had to be shot as they could not travel any further.”

Farm minister David Heath has ordered an investigation to find out what exactly happened and why so many animals were put down.

“I have ordered an immediate review into the unacceptable events at Ramsgate and have instructed the AHVLA to take a zero tolerance approach to enforcing and maintaining animal welfare.”

“I have ordered an immediate review into the unacceptable events at Ramsgate and have instructed the AHVLA to take a zero tolerance approach to enforcing and maintaining animal welfare.”
David Heath, farm minister

A DEFRA spokeswoman said the government took animal welfare very seriously and ideally would rather see livestock slaughtered as close as possible to where they are farmed.

“However, when animals are transported there are stringent rules including on fitness to travel, space allowances, ventilation and access to water and feed.

“These are strictly monitored and we will take swift action if they are not followed.”

An AHVLA spokesman confirmed to Farmers Weekly that officials from the agency were working with other parties involved to review what happened in the Ramsgate incident.

“When that review is completed we will comment on its conclusions,” he said.

The AHVLA took its responsibilities for implementing regulations governing the welfare of animals during transport extremely seriously, the spokesman said.

AHVLA inspectors undertook risk-based checks when animals arrived at the port of Ramsgate and referred any serious welfare infringements to the relevant local authority, he added.

In a statement sent to Farmers Weekly, the RSPCA said the decision to slaughter the sheep was taken by both a DEFRA vet and an independent vet.

“Those RSPCA inspectors involved described the events as ‘the worst day’ in their job.”.