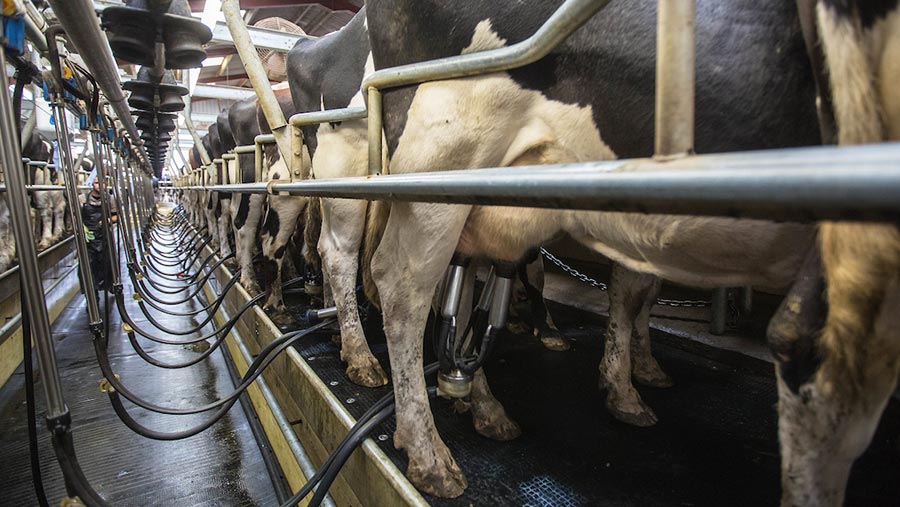 Dairy farmers and processors are unlikely to see swift additional financial support to support them through a coronavirus-related drop in income after industry leaders were stonewalled by Defra at a meeting this week.

Union representatives and processor CEOs held a conference call on Wednesday (15 April) with George Eustice where they reiterated demands for additional help.

They are battling the loss of demand for milk caused by the closure of coffee shops and caterers which have left an estimated 5m litres of a milk surplus to requirements.

The NFU said it had put forward proposals for grants for the worst affected farmers and a scheme to incentivise farmers to reduce production, as well as engage with the EU Commission to participate in any European Union measures to provide market support.

However, it is understood that Defra is reluctant to support their plans without further evidence that there is no spare capacity in other parts of the supply chain that can absorb surplus production.

The move leaves farmers who have suffered a drop in income reliant on the government’s Coronavirus Business Interruption Loan Scheme, which has been criticised for not releasing money to struggling firms fast enough.

The British Chamber of Commerce said that only 2% of firms have so far been able to access the scheme, which offers loans for up to a six-year term to businesses that can show that they would have been profitable before the pandemic.

This is likely to mean that many farms who need it will not be able to access it, said NFU dairy board chairman Michael Oakes, as the industry has been through three years of significant income volatility.

Affected farms are also likely to have been on the lowest milk prices before the crash, he added.

However, a rule change at the beginning of this month that opens the scheme to businesses that have enough security to access other types of finance is likely to mean more landowning farms are now eligible.

The government has also confirmed that businesses who receive subsidy payments are eligible for the scheme and will not fall foul of state aid rules, as some banks had initially thought.

An estimated 2,000 dairy farmers are likely to be under severe financial pressure after suffering delays to payment, price cuts or both, according to the NFU.

NFU President Minette Batters said: “The UK dairy industry is an iconic, living, breathing and nourishing part of our food supply chain playing a key role in the national effort while Covid-19 ravages the country.

“It faces unprecedented disruption in the short term because it cannot furlough its dairy cows, and its farmers cannot make use of the considerable Treasury support measures like other sectors of the economy.”

Freshways, the most high-profile processor in difficulty, wrote to its suppliers last Saturday (11 April) to inform them it would only be paying for 60% of contracted litres, effective as of 29 March.

The firm has lost 40% of its custom since the lockdown was implemented.

Farmers will receive half of the money owed to them for milk produced in March on 30 April, with the balance to be paid by the middle of May, said managing director Bali Nijjar.

“We feel that [this] is the fairest way to resolve the issues created by the coronavirus pandemic,” Mr Nijjar wrote.

“We will review the percentage over the next few months and reduce this based on volumes returning.