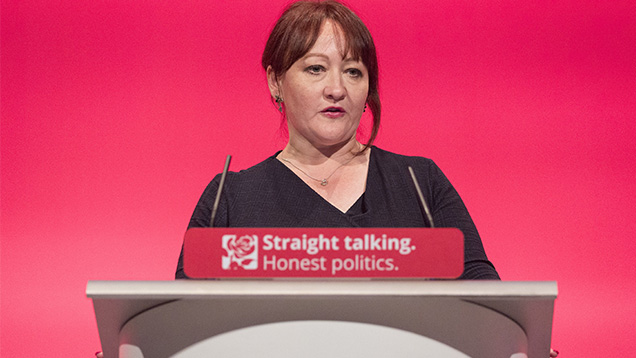 Vegan shadow Defra secretary Kerry McCarthy has pledged to support British agriculture – despite once suggesting that meat eaters should be treated like smokers.

Ms McCarthy made her first major speech since her appointment to the Labour Party conference in Brighton, East Sussex, on Tuesday (29 September).

“Yes, I am a vegan,” she told conference delegates, acknowledging that “some people are worried by that”.

She added: “Let me make it clear. I support British farming. I want it to be economically viable, environmentally sustainable and to have the very best animal welfare standards.”

“I want big strides towards greater food security – for Britain to become a country that can feed itself.”

Ms McCarthy said Labour would continue to oppose badger culling as a means of combating bovine tuberculosis in cattle.

It would also continue to oppose any attempt to repeal the ban on hunting with hounds.

Her speech came the day after farm leaders at a fringe meeting said they expected a shadow Defra secretary to champion British agriculture – but stopped short of criticising Ms McCarthy’s anti-meat stance.

The fringe meeting was hosted by the NFU and Food and Drink Federation (FDF).

“Let me make it clear. I support British farming. I want it to be economically viable, environmentally sustainable and to have the very best animal welfare standards”
Kerry McCarthy, shadow Defra secretary

Speakers were asked whether a vegan politician who believed meat eaters should be treated like smokers could be seen as a credible shadow Defra secretary by Britain’s livestock farmers.

NFU president Meurig Raymond said the union was “looking for a shadow secretary of state who is going to champion British farming”.

Mr Raymond said he and other NFU office holders were expecting to meet Ms McCarthy for the first time next week in her new role as shadow Defra secretary.

He said: “Until we have that meeting, I am not going to make any comments about whether she is good for farming or good for the food sector.”

NFU deputy president Minette Batters, who is a beef producer, said she “certainly wouldn’t judge Kerry McCarthy” until she met her.

But she added: “There are some really serious issues to deal with so we really do look forward to meeting her and having those conversations.”

“There are some really serious issues to deal with so we really do look forward to meeting [Kerry McCarthy] and having those conversations”
Minette Batters, NFU

Other speakers at the fringe meeting included Nick Smith, MP for Blaenau Gwent, who has been appointed as a shadow junior minister on Labour’s Defra team which is led by Ms McCarthy.

Mr Smith said: “She is a vegan but she wouldn’t want to impose her views on anyone else around her – it is as simple and straightforward as that.”

“I think we need to wait and hear from her in this job,” he said. “People say a lot of things – and God knows that if you looked at my back record it would be pretty shabby on some of these issues.

“Once you have a job, you have to respect the tenets of the job. I am absolutely sure she will do that – as has been said she has some really important issues to address.”

Ms McCarthy, who is MP for Bristol East, has insisted that her vegan views will not influence Labour’s policy on farming – although she has previously described the livestock industry as dirty and cruel.

Earlier, former shadow Defra minister Angela Smith MP told the audience there was “nothing as delightful as the wonderful fillet steak that I buy from my local butchers”.

The food industry – both in relation to production and processing – was a perfect example of why it was “unhelpful to divide the urban from the rural”.

Ms Smith said her own Sheffield constituency had a lot of hill farmers – particularly sheep producers – and food companies within its boundaries.

Farmers viewed themselves as primarily business people but the role of agriculture in safeguarding and enhancing the natural environment was crucial, she said.