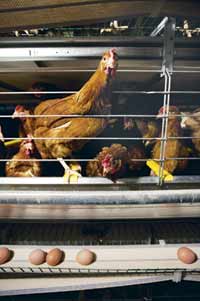 Latest estimates from EUWEP, the EU association for egg packers, traders and processors, suggest that there will still be about 103m hens in the EU in conventional cages after the ban takes effect on 1 January 2012, representing 29% of the total EU flock.

The role of the European parliament has become all the more important since the start of the year as it now enjoys equal power with the agriculture council in deciding legislative change.

Should the Commission come forward with any proposals to grant a derogation to certain member states in relation to the conventional cage ban, then the European parliament would have a key say in the matter.

“We were keen to let Mr de Castro know the facts,” said Mark Williams, secretary-general of EUWEP. “The problem is not going to go away and the EU Commission will have to come up with something. It will not allow almost 30% of the egg industry to become illegal overnight.”

The European parliament voted overwhelmingly in favour of the Directive to ban conventional cages when it was adopted in 1999, and Mr Williams believed it would oppose any attempt to delay implementation now.