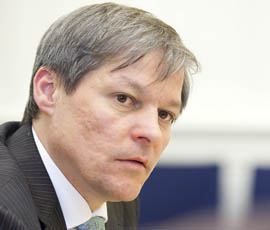 In an interview with Romanian newspaper Adeverul, Mr Ciolos said GM crops were not the panacea for meeting increasing food demands across Europe.

He said EU agriculture should not be based on producing cheap foods at whatever cost and consumer demand for quality produce would not be met by GM technology.

The bloc’s policy on GM crops should not affect the confidence consumers across the world had in European food, he added.

Rather than developing the performance of GM crops, Mr Ciolos said agricultural research should be directed towards developing diversity and quality of conventional produce.

He said Europe had always promoted maintaining and enhancing agriculture, food diversity and local products and that developing high value-added production would bring direct benefits for farmers and consumers.

While he believed farmers should be able to choose whether they grow GM crops, he said such choices should not be to the detriment of farmers who opt to grow traditional crops.

Earlier this year, MEPs said farmers in Europe should be given a choice over whether to grow genetically-modified or conventional crops. But they said where GM and non-GM crops co-exist measures must be put in place so either type of production is not adversely affected.

Public concerns over the introduction of GM farming can also be a reason to restrict or forbid GM production, provided the decision to do so “is justified and non-discriminatory”, they added.

While he said he preferred traditional agricultural methods, Mr Ciolos said in the interview his opinion was personal.

His colleague, health and consumer protection commissioner John Dalli, was in charge of dossiers on GMs, he added.