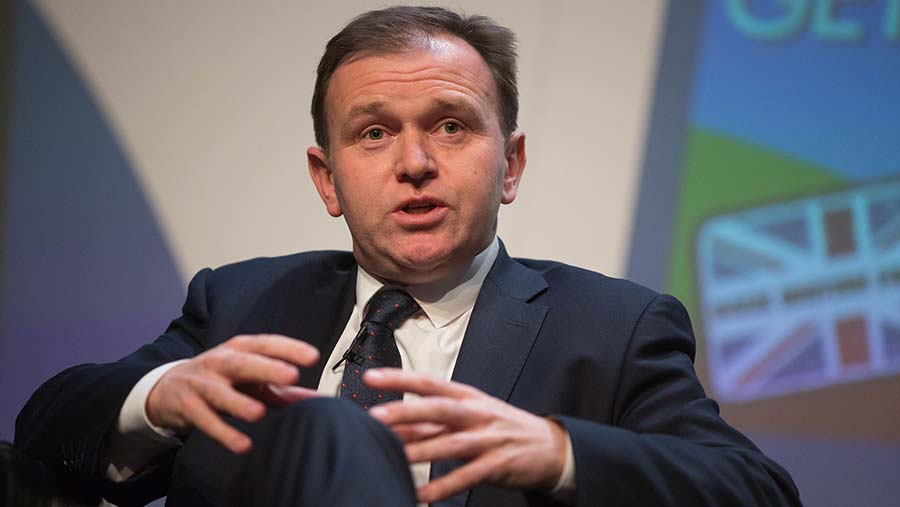 During the national debate at this week’s Oxford Farming Conference (OFC), host Christopher Price noted the stark differences in the conceptual approaches of future farming policy in the devolved regions.

In England, Mr Price said Defra was pursuing a policy of “public money for public goods”, whereby farmers and land managers would be recognised primarily as a source of environmental delivery.

In Northern Ireland and Wales, the devolved administrations were adopting a “more farmer-productive approach”, with more emphasis on food production and helping farmers increase their productivity.

Mr Price, who is chief executive of the Rare Breeds Survival Trust, said the rise in input costs and labour on farms in England had increased significantly in the past few months.

He asked the Defra minister if farmers deserved some help to see them through this time of change.

Mr Eustice replied: “The key thing to note is that in terms of farm profitability, since the 2016 EU referendum result, farm incomes have generally been in quite a strong position.

“We have seen commodity prices rise. Despite all of the fears that leaving the EU might be a disaster for the sheep sector, the price of lamb is running at record highs. It’s a sector that’s in good shape. The same is true of beef.

“On arable, in the most recent data we have, gross margins per hectare are up by around 30% for most cereals. They are down a little bit on things like potatoes and some others.

“But generally speaking, the farming sector, particularly those that require the BPS most, are in a very good financial position at the moment and the increase in gross margins that they [farmers] have had – notwithstanding the fact that they have also seen an increase in input costs – more than offsets the kind of reductions that we’re making in their BPS payment.”

He said some areas might need a modest structural increase in farmgate prices to ensure they remain profitable, but the concept that this reward should come from the market was “undeniable”.

And concerning the delivery of environmental goods, Mr Eustice said Defra had an obligation to ensure payments were at the right rate to attract enough farmers.

However, farmers quickly took Mr Eustice to task on Twitter, accusing him of seriously underplaying the huge rises in input costs and labour they have suffered.

Yorkshire farmer Rosey Dunn said the minister “seems to ignore the many increases in costs”.

Worcestershire dairy farmer Michael Oakes, who is also NFU dairy board chairman, tweeted that Mr Eustice’s comments were “not true for the vast majority of dairy farmers who have seen some increase in milk price but for most this is dwarfed by the input costs, and that’s before next season’s fertiliser costs”.

Robert Martin, a grassland dairy farmer and Arla owner, and national vice-chairman of the Tenant Farmers Association, tweeted: “Fertiliser price increased by three times, electric has doubled in price, feed in some cases has doubled in price and wage costs up 50% for casual labour, if you can find it. Which has led to a drop in margin. All good then.”

Moss Valley Farmers, based in Sheffield, tweeted sarcastically that pig farmers were “raking it in at the moment…”

Nottinghamshire arable farmer Peter Gadd wondered “what planet Eustice has been on while farm input price inflation has rocketed”.

“The fertiliser price has gone up by 300% since last summer. It’s really, really concerning. If farmers don’t buy fertiliser to grow both crops and livestock, that will put food security under serious threat.”

Mr Eustice later went on to suggest at OFC that producers needed to “stand their ground” and “take a tough position with retailers to ensure that the money they are paid reflects the costs of their production”.

But Martin Lines, a farmer and chairman of the Nature Friendly Farming Network, told The Guardian it was “very difficult for individual farmers to stand their ground against price pressures from retailers who hold all the bargaining power”.

He said: “There is a role for the government to play in giving farmers more power within the supply chain so they are fairly rewarded for food produced to high environmental standards. Government should intervene to ensure contracts between buyers and sellers are fair.”