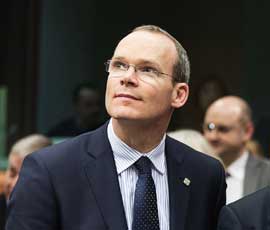 A final push for CAP reform is due to get under way in Brussels after European farm ministers agreed a compromise position for negotiations.

Trilogue talks between the European Commission, MEPs and European farm council representatives will restart in Brussels on Wednesday (26 June).

The aim is to find a political agreement on CAP reform after the council of ministers hammered out a revised negotiating stance on Tuesday (25 June).

Ireland holds the EU presidency and Irish farm minister Simon Coveney has been given the mandate to represent the council of farm ministers following their agreement in Luxembourg.

Ahead of the meeting, European farm commissioner Dacian Ciolos said: “Negotiations on CAP reform have made good progress in the past few days, which makes me confident of our capacity to reach a political agreement.

“We have made important steps forward on each of the four regulations of the legislative package.”

The main issues on which the three institutions have agreed during the trilogue talks include allowing members states to implement ‘greening’ in a way that suits their individual circumstances.

All member states will also be permitted to ‘couple’ 8% of their payments, plus another 2% for protein crops if they so wish. Any members states who used more than 5% coupled aid between 2010-2013 will be allowed coupled payments at 13%, plus the 2% for protein crops.

In addition, it looks set to be agreed there should be a mandatory young farmers scheme, funded by up to 2% of the national ceiling and an optional small farmer scheme.

The minimum area where there will be no Ecological Focus Area (EFAs) requirement has been set at 15ha of arable land. The percentage will start at 5% in 2013 and move to 7% after a Commission report in 2017.

Members states will also be allowed to shift up to 15% of money from Pillar 1 to Pillar 2 of the CAP or vice versa if they want to (voluntary modulation). This has already alarmed farmers in England who fear that the government will take up this option and leave them disadvantaged.

DEFRA secretary Owen Paterson said there had been gains and disappointments across the two days of talks: “We fought hard to secure the freedom to green direct payments in a way that reflects our national circumstances. UK Governments can now transfer extra funds to their rural development budgets which represents the best use of public money whilst delivering the best environmental outcomes.”

However, he said he was disappointed at what he saw as a ‘high level’ of coupling being given the green light.

“It’s disappointing that the European Commission wants farmers’ dependency on subsidies to continue. Not only do they create market distortions, they are a poor use of tax payers’ money and discourage trading in a competitive open market.”

A press conference has been scheduled for approximately 4.30pm where is it expected that the detail of the broad agreement will be announced.