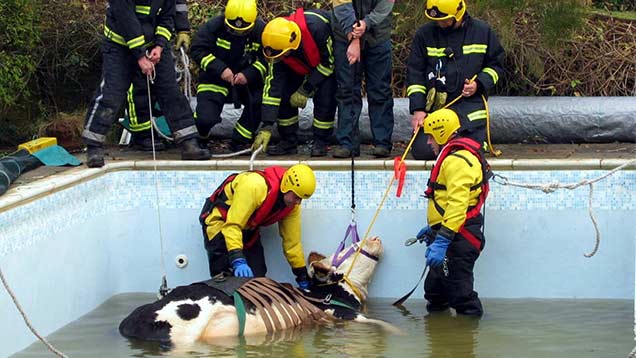 But the unit is being disbanded as part of a bid by the local authority to save £3.5m over the next five years.

The fire service said the equipment used by the unit could be donated to the RSPCA along with appropriate training in its use.

However, the Countryside Alliance is so concerned about the cost-cutting measure that it is seeking an urgent meeting with Welsh government ministers.

“The fire and rescue service is without a doubt there to serve the human population of Wales first and foremost but I am extremely concerned that there will be prolonged suffering and in some cases possibly neglect, if the service of rescuing large animals is completely withdrawn,’’ she said.

“We have seen incidences of animals been rescued from flooded fields, cattle rescued from overturned lorries and horses from flooded ditches, even from a frozen lake at Llyn Maelog. Without the fire and rescue services these animals would not have survived.”

Assistant chief officer at the North Wales Fire Service, Richard Fairhead, said the organisation was not obliged by law to rescue large animals.

But he admitted it was a concern if people compromised their safety by attempting rescues therefore he urged them to contact the RSPCA or their vet after the changes come into force in April.