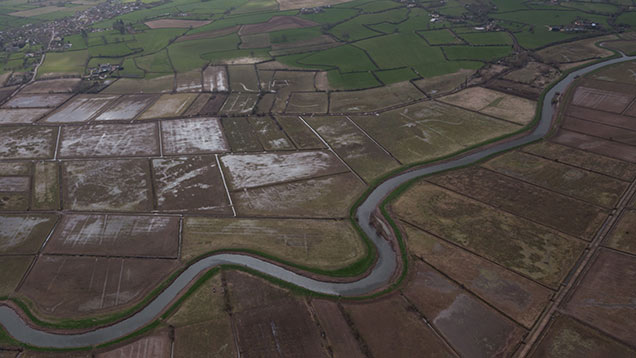 Millions of acres of farmland in England are at risk of flooding because the government is spending too little on flood defences, a report by spending watchdog the National Audit Office says.

Defra and the Environment Agency have limited resources and current spending is “insufficient” to meet many of the maintenance needs the agency has identified, the document concludes.

According to the report, about half of the country’s flood defences – some 1,356 schemes – are only being maintained to a “minimal level”.

In areas where maintenance of flood defences has been given a lower priority – typically rural areas where there are few homes and large areas of farmland – this will “increase the danger of deterioration of defences and therefore flood risk”.

Defra has repeatedly asserted that this government is spending more money on flood defences than any other government.

Indeed, the report states that the government made an extra £270m available following 2013’s winter storms, which flooded huge swathes of farmland on the Somerset Levels.

But without the funding provided following the winter floods, total funding has decreased in real terms by 10% since 2010.

Amyas Morse, head of the National Audit Office, said: “If we set aside the emergency spending in response to last year’s floods, and give due credit for efficiency improvements, the underlying spending on flood defences has gone down.

“The agency, as it recognises, will need to make difficult decisions about whether to continue maintaining assets in some areas or let them lapse, increasing in future both the risk of floods and the potential need for more expensive ad-hoc emergency solutions.”

Commenting on the report, Margaret Hodge (Labour), public accounts committee chairman, said she was “deeply concerned” that the government was not spending enough to maintain flood defences.

However, a Defra spokesman maintained that in real terms, spending on flood protection had actually increased over this term.

More than 6,000 properties and 6,900ha of farmland in Somerset were inundated in the catastrophic winter floods of 2013. Some farm businesses will still take many months to fully recover from the disaster.