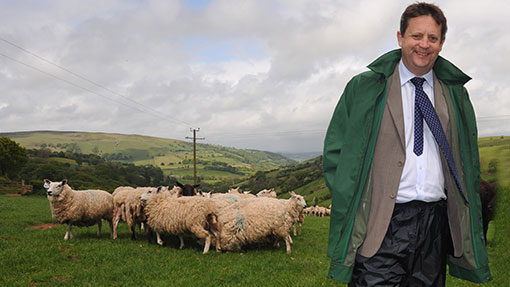 During a Senedd debate on the meat and dairy sectors last week Mr Davies claimed an average farmer received a subsidy equivalent to two and a half times the average wage of his Blaenau Gwent constituents.

Mr Davies, who was sacked from his post in July after seeking information on farm subsidies paid to opposition politicians, also suggested that agriculture had a subsidy-focused culture.

“All too often the agriculture industry finds itself locked in a culture that denies both the reality of global markets within which it must compete. This denial of reality is aided and abetted by politicians,” he told the Senedd on 22 October.

“Agriculture will not succeed while it is held back by a culture that is subsidy focused and not business focused, a culture of demand and dependency.”

He said he was shocked when he read the full list of CAP Pillar 1 payments in Wales.

Opposition politicians leapt to the defence of farmers, insisting that it was deficiencies in the market that generated the need for subsidies. They called on the new farm minister, Rebecca Evans, to distance herself from Mr Davies’ remarks.

Mr Davies, was already an unpopular figure among Welsh farmers after opting to transfer 15% – the maximum rate allowable under EU rules – away from direct payments into the Rural Development Plan.