Farm subsidies would be phased out under a UK Independence Party government as shoppers are encouraged to buy ethically-produced, British food.

Unveiling its policies for food, farming and the environment, the party said it would ensure farmers did not suddenly lose the single farm payment.

But it said over time it would use advertising and labelling campaigns to promote British produce and fairer food pricing, replacing the need for many subsidies.

Launching its manifesto on Tuesday (13 April), UKIP said it would withdraw from the European Union if it won the general election next month.

All EU-imposed rules, quotas and targets would be reviewed, repealed and reformed where necessary, the manifesto adds.

But it would retain its seat at the World Trade Organisation to allow the UK to “pursue trade policies which were in the national interest”.

While it would support genetically-modified food research, the manifesto says the party would continue to oppose production of GM foods.

It would also support a supermarket ombudsman and change legislation to allow the formation of more farmer co-ops to “put food producers on a more equal footing with supermarket buyers”.

• What are the big issues for you as a rural voter? Tell us on our forums.

• Which words feature most in UKIP’s green manifesto? Farmers Weekly put the party’s food, farming, countryside and environment policies through a programme called Wordle, which picked out the top 20 words used in the manifesto: 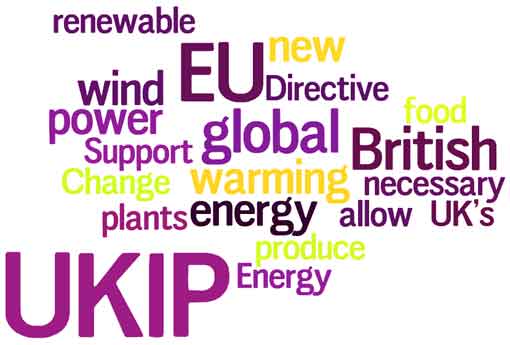