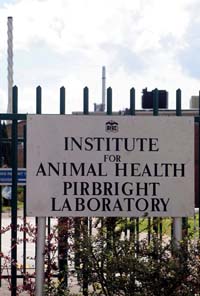 The review had highlighted poor management and under-funding at the “shabby and dilapidated” laboratory at the centre of the outbreak.

Centred on the Institute of Animal Health at Pirbright, Surrey, it described the outbreak as an “avoidable event that should never have happened”.

While the government’s response was better than that seen to the last outbreak in 2001, there were still deficiencies to be addressed.

The government’s response contains a range of actions, commitments and decisions – some that have already been implemented and others that are still in the pipeline.

Mr Benn said he was grateful for Sir Iain for his review and for his recognition of how government and the livestock industry tackled the outbreak together.

“Even though most aspects were handled well, I acknowledge that there are always lessons to learn and ways we can do better,” he said.

Since 2007, the government had dealt with other exotic diseases, and applied what it had learned through dealing with foot-and-mouth.

“As a result we are now better prepared. I am committed to continuing to work with the industry to ensure that we are as prepared as possible for future events.”

Sir Iain had personally recommended the repositioning the Institute for Animal Health as a new national Institute of Infectious Diseases.

In response, the government said the Institute for Animal Health would continue to be funded so it could provide world class research facilities.

The Biotechnology and Biological Sciences Research Council is expected to submit a business case soon for the redevelopment of the Pirbright site.