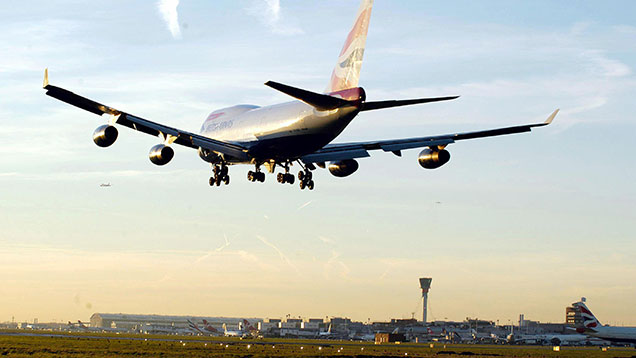 The NFU is urging government to make a full assessment of the impact a third runway at Heathrow could have on farmers.

An independent report has identified Heathrow as the preferred site for a new runway after a three-year investigation.

The Airports Commission’s long-awaited report said a decision to expand Heathrow would add £174bn to the UK economy and create 70,000 more jobs by 2050.

The NFU said it had received a number of calls from farmers in the Heathrow area whose businesses would be directly affected.

Members have aired a wide range of views on the proposal both in favour and against the plans.

Although the union recognises that development of Heathrow would help secure the future of our economy, it said a full consultation of affected farm businesses must be done “sooner rather than later”.

A third runway at Heathrow would involve large areas of farmland being compulsory purchased as part of the scheme, an idea which has angered landowners who have farmed in the area for many decades.

A spokesman for J Rayner & Sons, farmers based in Horton, near Windsor, said Heathrow Airport expansion would “finish off the business” and have a detrimental effect on infrastructure, which was “already struggling to cope”.

“The family has farmed here since the 16th century. We are in the same boat as farmers affected by HS2. Our lives are on hold.

“We cannot do anything on the farm to invest, such as making units or renting farm properties, because of the threat of Heathrow expansion.”

“We cannot do anything on the farm to invest, such as making units or renting farm properties, because of the threat of Heathrow expansion.”
J Rayner & Sons, spokesman

NFU rural surveyor Louis Staples said: “Our primary concern is that impacts should be kept to a minimum.

“Affected farm businesses should be treated fairly and any necessary adjustments to their business practice should be fully supported and mitigated as an integral part of a compensation scheme.

“We suggest that an agricultural impact assessment is undertaken of all proposed flight routes, to identify where low flying aircraft might risk causing stress to farm livestock animals.”

Where specific risks to holdings are identified, the airport must engage with affected landowners and devise an acceptable mitigation strategy, offering appropriate compensation, she added.

The government is expected to decide in September whether to accept or reject the Airports Commission’s recommendations for a third runway at Heathrow, which it chose to back over a second runway at Gatwick.