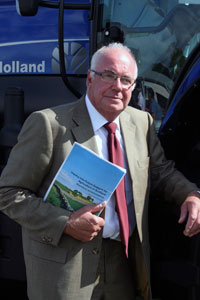 The Scottish Government is set to introduce minimum stocking densities on farm land to crack down on so-called “slipper farmers” – inactive claimants who use barren hillsides to activate single farm payments.

The proposal was announced at the Royal Highland Show when Brian Pack released the short-term recommendations from his long-awaited Inquiry into Future Support for Agriculture in Scotland.

His plan was immediately welcomed by NFU Scotland president Jim McLaren who admitted the union had been wrestling with the difficult political issue.

He added: “This is probably the best direction of travel.”

It is understood that measures, which don’t require EU approval, could be put in place by the Scottish Government to be effective from January 2011.

The minimum stocking rates recommended are one livestock unit per hectare (LU/ha) for non-LFA grazing and 0.06 LU/ha for LFA.

Farms which fell below these limits would trigger an inspection and producers would be given 60 days to remedy the situation.

Failure to do so would result in penalties under the GAEC legislation.

Mr Pack said he was satisfied that the recommendations were workable and likely to be effective in changing behaviour.

“The best way to minimise the hassle and expense of establishing a minimum stocking rate is to have a breach established by Scottish Ministers with clear guidance provided as to what is likely to be treated as undergrazing,” he said.

“I don’t envisage entitlements not being used or high penalties incurred. I envisage the behaviour of farmers changing. Folk will find ways of using them.”

The report also recommends the historic basis of allocating SFPs should stay in place until the post 2013 CAP Regime is known and implemented, and sufficient resources be made available to the Directorate for Rural Payments and Inspections (DRPI) to enable it to develop a new computer system as soon as possible.

Mr Pack said: “How can a progressive modern industry like Scottish agriculture have a support regime based on what was happening in 2000 and 2002?

“That has to change but we must wait until we know what the CAP is changing to and we must ensure we are prepared for the changes when they come.

“We don’t want to get into the situation the Rural Payments Agency is in or incur their enormous costs of administrating the scheme.”

Mr Pack said he had been keen to use Article 68 for the advantage of the Scottish farming industry and believed it might become even more important in a reformed CAP. However there had been no will among stakeholders to make it work.

He added: “It would have been an uphill struggle.”

Other recommendations include changing the existing Article 69, Scottish Beef Calf Scheme (SBCS), into an Article 68 measure to ensure it lasts after 2012 and prioritising the introduction of regulations that puts new entrants on an equal footing with businesses established before 2004.

• For more from the Royal Highland Show click here