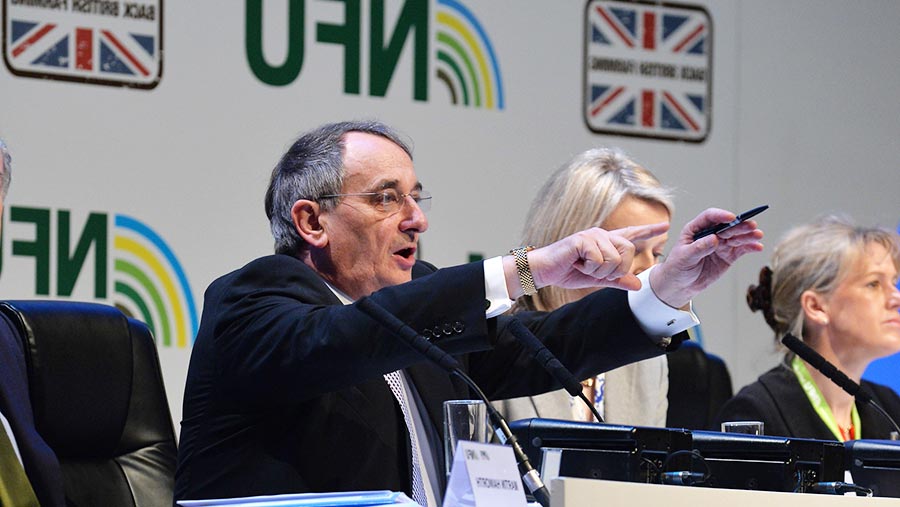 British agriculture needs a bold plan from government to ensure a sustainable future for farm businesses and the nation’s food production, conference delegates will be told today at the NFU conference in Birmingham.

Some 1,300 farmers and other industry stakeholders are attending the two-day conference at the Birmingham ICC on 23-24 February.

NFU president Meurig Raymond will use the conference to call for “actions to back the words” from Defra on the government’s proposed 25-year plan for food and farming.

Mr Raymond said: “British farming has felt blow after blow in recent years – one thing I know for sure is there is no possible way that any sector can carry on in the same vein.

“Farmers borrowed £17.8bn from banks in 2015 – a record high. This paints a picture of the many businesses having the profit squeezed out of them.

“Viable businesses cannot continue operating without profit and farms are no exception.”

A commodity slump across a range of sectors has seen December 2015 average prices for milk, wheat and pigs all down more than 30% from the same period two years ago.

Mr Raymond said: “We are calling on the government to provide the tools our sector needs to overcome the challenges and ensure they thrive.

“The 25-year food and farming plan must address the fundamental issues of productivity and competitiveness. It needs to see a culture change about how we value food and farming.

“It is crucial that Defra’s plan ensures British farmers have access to the same agri-tech developments as its competitors – such as world-class plant protection products and novel breeding techniques.”

Further downward price pressure on the horticultural sector in particular is expected following the introduction of the National Living Wage from April.

“The implications of the introduction of a National Living Wage will be catastrophic for our horticultural sector,” he added.

Many horticultural businesses rely on manual labour more than other sectors of the industry because a lot of fruit and vegetables can’t be harvested and packed by machines.

Increasing wages combined with low fruit and vegetables prices had the the potential to make many growers unprofitable within just three years, said Mr Raymond.

“We aren’t against a living wage in principle, but it must be sustainable for businesses and workers.”

It must be one where “consumers are able to see clearly marketed British food and buy British because of the quality and values that underlie our production,” he said.

The NFU is also calling for a commitment to increase UK self-sufficiency in food production.

“The UK has the fastest growing population in Europe – we must be able to feed the nation domestically and reduce the reliance on imported food.

“Being 62% self-sufficient is not something we should settle for and the projected decline to 53% by 2040 is not an option for the sector.

“The future should see our industry reach its productive potential and Defra’s plan has the power to enable farmers to do just that. The plan must back the future of British farming.”

Defra secretary Liz Truss is expected to underline the government’s commitment to farming in a keynote speech to conference delegates on Tuesday (23 February).