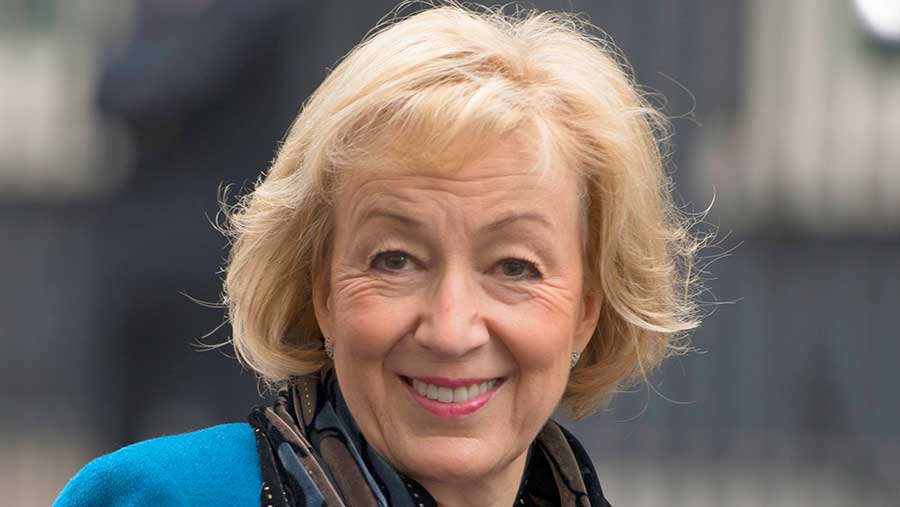 Defra secretary Andrea Leadsom has promised to increase UK farm productivity and scrap “unnecessary” red tape for farmers, if the Conservatives are re-elected on 8 June.

Mrs Leadsom said Brexit would allow her party to translate the body of European law into domestic regulations so rules around the environment, food and farming “will be set in the UK”.

Writing on the Conservative Home website, she said: “Over time, that means we will be able to prioritise scrapping unnecessary burdens on farmers and ensure that our environment is enhanced by laws that focus on the needs of the UK, rather than 28 EU member countries.”

Mrs Leadsom, who is also the Conservative candidate for South Northamptonshire, said leaving the EU would also present “huge opportunities” for the environment, our food and farming industries, and rural communities.

The food and farming industry employs one in eight people in the UK and generates more than £100bn each year for the economy.

Citing Conservative election manifesto commitments to the food and farming, she said: “Our priorities are simple: to grow more, sell more and export more Great British food, and to be the first generation to leave our environment in a better state than we inherited it.”

Although farm productivity is “higher than ever before”, Mrs Leadsom cautioned: “There is still much more we can do to support innovation in farm techniques, skills development, greater resilience to disease and floods, as well as environmental stewardship and sustainability.”

Mrs Leadsom also repeated her party’s manifesto commitment to fund agriculture to the same level, if the Conservatives are re-elected.

“Last summer, we moved swiftly to provide farmers with continuity and certainty on EU agricultural funding,” she said.

“It means that if elected on 8 June, Theresa May’s Conservatives will commit to the same spending on farming and food production over the next Parliament as is now provided by the EU’s Common Agriculture Policy.”

Mrs Leadsom said the UK had some of the highest animal welfare standards in the world, adding: “We will build on that.”

The Conservatives have pledged to make CCTV in slaughterhouses mandatory and “control the export of live animals for slaughter”.

On environmental policy, Mrs Leadsom said her party had already launched the first ever litter strategy for England, which would “educate people and… introduce enforcement against littering”.

She added: “We have also committed to plant 11m trees – and a further one million just in our towns and cities.

“We are funding natural flood management projects to better protect communities, and we are introducing greater safeguards for our ancient woodland.”

Victor Southern said: “Good to hear from this minister after months of silence.”

He said: “Unfortunately, to grow more needs more land put to agriculture and/or increasing intensity and yield, neither of which is conducive to improving the environment.”