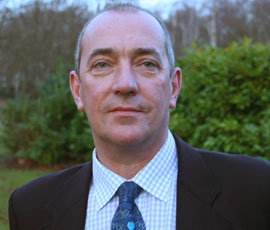 Lincolnshire farmer Jonathan Brant is to run for the post of NFU vice-president.

He has been nominated by the Lincolnshire NFU county group and is expected to submit his election papers over the coming days.

A third generation family farmer, Mr Brant farms an Area of Outstanding Natural Beauty that includes the highest point of the Lincolnshire Wolds.

He has been an NFU member for 20 years, serving as NFU county chairman and sits on the NFU East Midlands regional livestock board.

“I feel I have the push and drive top represent members interests and the time is right to stand,” he told Farmers Weekly.

If successful, Mr Brant said he promised members an open approach from a vice-president who understood the challenges of mixed farming.

“We can talk about CAP reform until the cows come home but farmers also face the challenges of animal health and welfare and cost-sharing.

“The issue of bovine tuberculosis is also crucial for the livestock sector.”

Mr Brant’s farm is in both entry-level and higher-level stewardship, with suckler beef kept on permanent pasture.

“We’ve always had cattle and I’ve been brought up with both cattle and sheep,” he said.

“I have the experience to represent both arable and livestock farmers.”

Current NFU vice-president Gwyn Jones has confirmed that he will stand for re-election to the post in the union’s elections next February.