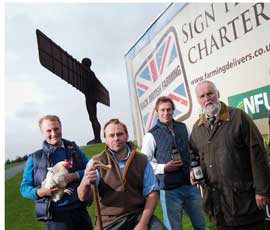 Morrisons has put its weight behind the NFU’s Back British Farming campaign.

The NFU has been touring the UK collecting signatures for its charter which aims to put more British food on British plates after it emerged the UK produces just 62% of its food.

The whistle-stop tour started at the Conservative Party Conference, where it picked up signatures from attendees.

The ad van then headed up to the North East, stopping at Morrisons’ headquarters in Bradford, West Yorkshire, before visiting the Angel of the North.

Morrisons, which claims to buy a bigger proportion of British food than any other major supermarket, reiterated its commitment to British farming.

The NFU’s new North East regional director, Richard Pearson, said it was encouraging to see the supermarket pledge its support.

With public backing, we are determined to change a situation where we import more than £37bn of food and drink – much of which we could produce ourselves. We believe that together we can make a difference and that’s what our charter is designed to highlight,” he added.

Other campaign supporters include Waitrose, the Women’s Institute and TV chef James Martin.