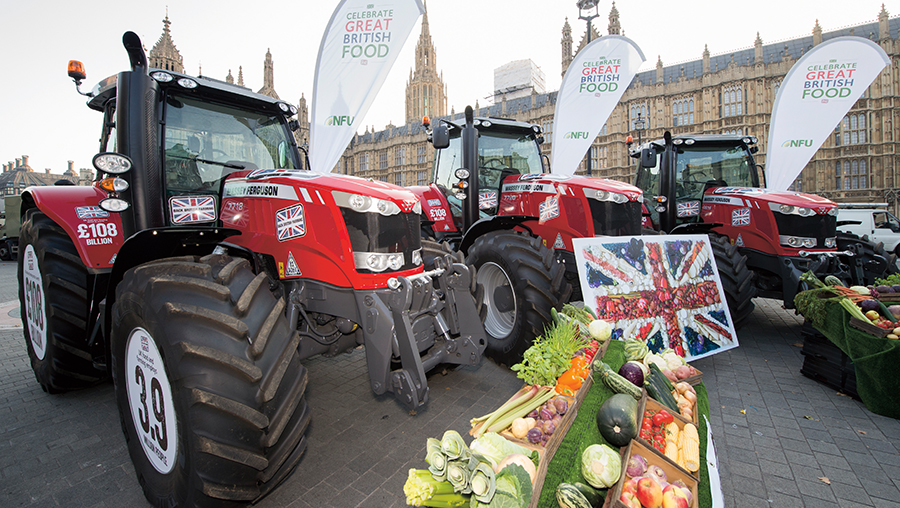 More than 100 MPs signed a pledge to support growers and livestock producers during a Back British Farming day held by the NFU in central London this autumn.

The special day was just one highlight during a 12-week campaign to showcase the benefits of British food and farming to the national economy.

The farmer-backed initiative saw the NFU, Agriculture and Horticulture Development Board (AHDB), Red Tractor and Love British Food unite to co-ordinate a calendar of events to highlight 2016 as the government-designated Year of British Food.

Back British Farming day on 14 September helped to kick off an autumn of promotional activity championing farm-assured British food.

Television and in-store promotions aimed to give shoppers a better understanding of the standards to which assured food is produced – and further increase consumer loyalty and purchasing of Red Tractor-labelled products.

The NFU said it was important to show that farming deserved ongoing public support as the government prepared to negotiate the UK’s exit from the EU. MPs who signed the Back British Farming pledge included Defra secretary Andrea Leadsom and Defra minister George Eustice.

Mrs Leadsom said: “British farming is a bedrock of our economy and enjoys a global reputation for producing world-class food.”

NFU deputy president Minette Batters said British farming needed recognition for the key role it played – not only in producing food, but in its contribution to the country’s economy, in creating jobs and a rural landscape that attracted millions of tourists.

Despite its repeated pledges to back British farming, the government is still yet to publish its promised 25-year strategy for food and farming.

The strategy was described by Defra minister George Eustice as an early priority after the Conservatives won the 2015 general election. But 18 months later it has still to be published – with progress delayed as the government concentrates on devising its post-Brexit farming policy.

The aim of the strategy is to address all the issues that could expand and improve the food and farming industry – including rural development funding, agricultural support, developing new export markets, the role of agri-technology, and skills and apprenticeships.

Farm leaders believe a government strategy for agriculture would give the industry clear direction. Ireland, for example, saw farm output grow by 33% in four years after it introduced a Food Harvest 2020 strategy in 2010. A similar UK strategy still seems a long way off.