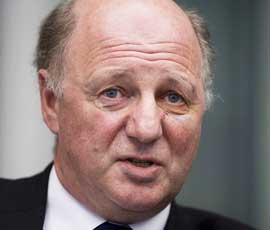 Retailers or food manufacturers selling eggs or egg products from conventionally caged birds after 1 January 2012 can expect to be “named and shamed”, this week’s Egg and Poultry Industry Conference was told.

British Egg Industry Council vice-chairman Andrew Joret said the organisation would be working closely with both Compassion In World Farming and the RSPCA to help identify any British companies using illegal eggs.

The BEIC already had lists of companies that were involved in importing eggs and egg products, he said. If anyone was caught using illegal product, then they would be exposed in the national media, as a means of “scaring the hell” out of anyone else who was thinking of doing the same.

DEFRA farming minister Jim Paice endorsed the idea of publicly naming anyone caught using illegal eggs. “Rest assured, if we have hard evidence that companies are doing this, we will take whatever action we can to let the public know.”

Mr Paice added that anyone using eggs from conventional cages would be breaking the law “and must accept the consequences of doing so”. But he refused to commit to a unilateral trade ban against countries still using conventional cages in 2012, saying only he “had not ruled it out”.

Instead, he said he was working with ministerial colleagues in Brussels to develop a so-called “gentleman’s agreement” on how to deal with illegal eggs.

All eggs would have to go into the processing sector and remain within that member state.

But BEIC chief executive Mark Williams said such a gentleman’s agreement – which would have not legal basis – would be “nothing short of disastrous for our industry”.

With an estimated 27 million illegal hens in Italy and 20m in Spain, there would be significant leakage of shell egg and processed egg back into the market, which would cause a great deal collateral damage.

Mr Paice agreed that such leakage was inevitable, especially for things like pizzas and cakes. But the gentleman’s agreement on the table in Brussels may be the best deal available “It’s not ideal, but I want to find a way forward rather than just grandstanding and saying we don’t like it,” he told the conference.

Mr Joret said that anyone found trying to cheat the system would be thrown out of the Lion scheme for ever.