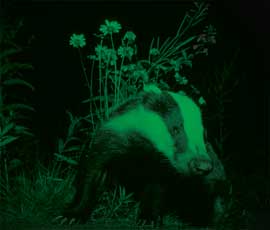 Marksmen could be trained to use sophisticated military-style night vision technology to cull badgers.

Rifle-mounted night vision scopes and thermal imaging cameras are being trialled for possible use in the two pilot culls in Gloucestershire and Somerset, due to start this autumn.

The NFU’s farm policy team has held demonstrations of the technology with representatives of the two pilot areas and officials from DEFRA, Natural England and the independent scientific panel.

As badgers are nocturnal, the technology is part of plans to ensure safe, effective and humane culling of badgers, the NFU said.

An NFU spokesman said the technology being tested was Generation 2 night vision scopes with infrared illumination – digital devices that cost about £1,300 and are fixed to rifles.

“Night vision technology will play an essential part in ensuring a safe, effective and humane cull of badgers, and is already being used extensively by professional pest controllers and wildlife managers,” said the spokesman.

“We expect their use to be approved and that the fully-qualified professionals using night vision scopes will have completed a detailed training course designed specifically for people undertaking licenced badger control, which is needed desperately to reduce levels of TB in the environment and in our cattle herds.”

Farmers Weekly understands the technology could be approved by Natural England this week, but officials from all groups concerned would not confirm this.

A spokesman from Natural England said: “We continue to work with DEFRA and the NFU to secure a workable approach to the use of night vision technology to support an effective, humane and safe cull. We expect a final decision to be taken shortly.”

A DEFRA spokesman added: “We will be publishing our guidance for the culling soon and we will have to wait and see what is in it. There is no date or time scheduled.”