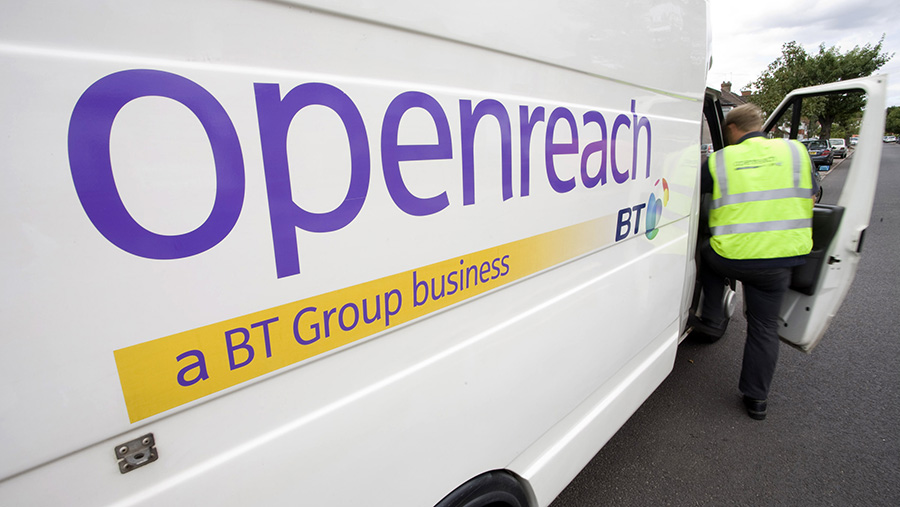 Faster rural broadband connections are more likely if BT agrees to open up its cable network to competition to other providers, say farm leaders.

The Country Land and Business Association (CLA) and the Farmers’ Union of Wales (FUW) said they welcomed a decision by telecoms watchdog Ofcom which said BT must open up its network.

Both organisations have long been campaigning for faster internet services – warning that farmers and other rural businesses are suffering from slow or non-existent connections.

Ofcom said there was a digital divide between homes and businesses with the latest high-speed fibre connections and those languishing on copper-based phone lines.

The watchdog stopped short of ordering BT to be broken up.

But it said the company must open up its network of telegraph poles and tunnels so rivals could build their own, advanced fibre networks, connected directly to homes and offices.

He said: “We have said from the outset that separating BT Openreach [the division of BT that owns the fibre and copper wires that run from the local telephone exchange to homes and businesses] from BT would create a significant distraction from getting homes and businesses connected in rural areas.

Ofcom’s “robust recommendations” reflected an “ongoing sense that not everything that could be done is being done to deliver universal broadband,” said Mr Murray.

He added: “Now is the time to get on with connecting homes and businesses to the fast broadband they desperately need.

FUW president Glyn Roberts said superfast broadband services were still not reaching farmers across Wales – despite a lot of investment by the Welsh government.

He said: “More needs to be done to accelerate the process by which these essential services are readily and reliably available all over Wales – not just in urban areas.”

Access to broadband in rural areas was still well below the national average, with farm businesses representing the highest proportion of those with no access at all.

Mr Roberts said: “It is essential that the limitations of online services and communications are recognised, and that rural access to broadband is increased.”

This was especially so because of the government’s increasing requirement that farmers should fill out forms online rather than on paper.

“We cannot stress the fact enough that more needs to be done.”

Responding to the Ofcom report, BT chief executive Gavin Patterson said the company was willing to let other providers use its network.

Mr Patterson said: “We are happy to let other companies use our ducts and poles if they are genuinely keen to invest very large sums as we have done.

“Our ducts and poles have been open to competitors since 2009 but there has been little very interest to date. We will see if that now changes.”