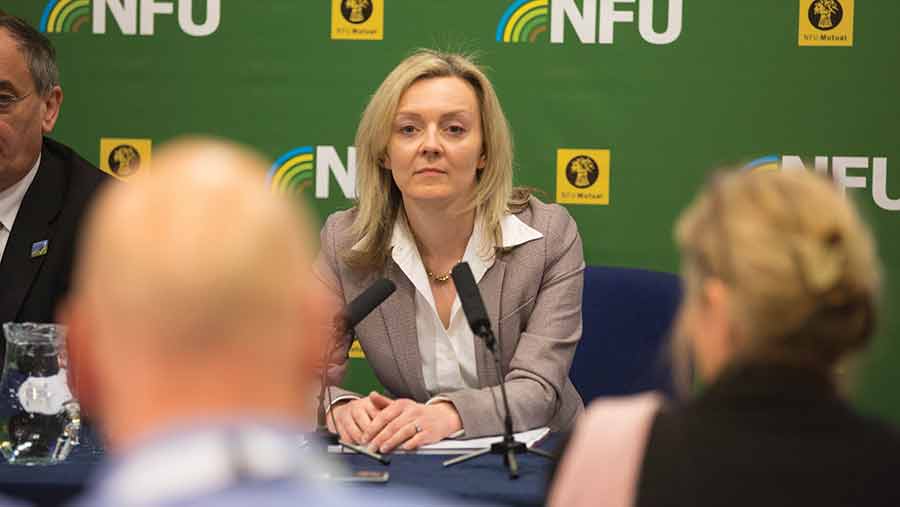 Defra secretary Liz Truss is under pressure to outline the government’s long-term commitment to UK agriculture when farmers and industry leaders gather at the NFU’s annual conference in Birmingham.

Ms Truss is among the keynote speakers at the two-day event, which is being held under the banner “Backing the future of British farming” on 23-24 February. She is due to address some 1,300 delegates on the opening day of the conference.

Demand for a long-term government plan for farming was a central plank in the NFU manifesto launched in the run-up to the 2015 general election. One year on, however, there is little sign that a 25-year food and farming strategy subsequently promised by Defra is any nearer.

But the threat to most farm businesses was more fundamental still, added Mr Clark. Defra should also address immediate challenges facing the industry. “Profit is seeping out of the sector and investment with it, not helped by increasing labour costs and intense pressure on retail prices.”

Initially, the strategy was expected to be in place by the end of 2015. But that timetable appears to have slipped. While there is acceptance that the strategy should be “right, rather than rushed”, farmers say a coherent long-term plan can’t come soon enough.

Mr Clark said: “A plan to ensure British agriculture thrives needs to be bold, it needs to address fundamental issues of productivity and competitiveness and it needs to see a culture change about how we value food and farming. It must set a confident path for all parts of the UK food system.”

Uncertainty is being fuelled by concern among many farmers that any long-term strategy for agriculture must not be rendered worthless if the UK leaves the European Union following the government’s promised in-out referendum.

Prime minister David Cameron is meeting EU leaders in Brussels ahead of a referendum as soon as June. But Defra still refuses to say how it would support British farmers – and to what extent – in the event of a “Brexit”.

Meanwhile, the government insists that progress is being made and its long-term strategy for agriculture will be unveiled in the coming months. A Defra spokeswoman said: “The 25-year Food and Farming Plan will be published in the spring.”