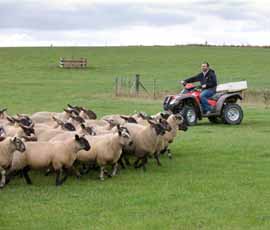 Brussels has rejected proposals that would have increased the cost of quad bikes by up to 60%.

The proposed tightening of EU legislation would have placed farm quad bikes under the same rules governing ATVs used on public roads.

That would have enforced tougher limits on emissions and the introduction of compulsory ABS brakes, making quad bikes more expensive to buy and to run. But after lobbyng by British MEPs, the threat appears to have been lifted

On Monday 5 December a committee of MEPs voted to exclude utility ATVs from the package of regulations.

Instead a new category for farm ATVs has been included in the proposed legislation.

Conservative MEP Malcolm Harbour said: “We are very happy at the way the authors of this legislation have listened to our important objections so far as farm quads are concerned and haven´t blocked our proposed changes.

“This should mean that farmers who rely on all-terrain quads will be able to continue using them without the added cost of ABS, which would not be helpful off-road, or very demanding emissions limits which would have been disproportionate to the relatively low mileage they clock up, Mr Harbour said.

“Safety features that are welcome on road quads would have make farm quads less suitable and less safe, yet they would have become significantly more expensive. ATVs are an integral part of many farms and they must not be regulated out of existence.”

The decision of the committee is still subject to confirmation by a vote of the whole European Parliament.