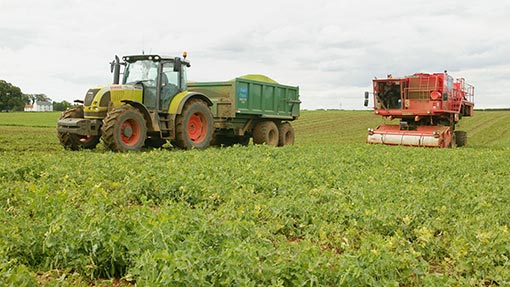 Scottish growers will need to meet strict management rules if they want to grow nitrogen-fixing crops to count towards greening measures under the new CAP.

Under the greening rules, which account for 30% of direct farm payments, farmers with more than 15ha of arable land claiming support must set aside at least 5% of their holding as an EFA.

These measures will come into effect under the new environmental element of the CAP from 1 January 2015.

Growers have known since June that nitrogen-fixing crops, such as peas and beans, would count towards meeting the ecological focus area (EFA) requirement.

But in Scotland, a nitrogen-fixing crop will only count as an EFA if:

• The crop is not harvested before 1 August each year, in order to protect ground-nesting birds

• Two different nitrogen-fixing crops are grown on the EFA area, to “extend the flowering period for pollinators”

In addition, the Scottish government has announced that only cutting, not grazing, will be permitted on EFA buffer strips.

Mr Lochhead pointed out that there were other ways for farmers to meet their greening requirements besides nitrogen-fixing crops – fallow fields, water margins, field margins and catch crops – and guidance could be found on the Scottish government website.

“However, it will not answer all farmers’ questions because we – like other administrations – are still lacking crucial clarity from Europe on a number of aspects,” he added.

For many, he reckoned the rules would “knock out” the option of growing nitrogen-fixing crops – an “important EFA option”.

“In our opinion, these prescriptions make the growing of nitrogen-fixing crops a non-starter on many farms and therefore severely limits the EFA options for Scottish growers,” said Mr Miller.

“Unfortunately, nitrogen-fixing crops is only one greening issue on which we were awaiting clarity.

“With Scottish farmers having to second guess what all the final greening rules will be, planting decisions cannot be completed until the Scottish government makes all the information available.”  In contrast, growers in England have known for some time that they can grow nitrogen-fixing crops to meet their EFA requirement with no management restrictions attached other than meeting Good Agricultural and Environmental Conditions (GAEC) requirements.

Mark Mitchell, director of rural land management at Bell Ingram, said government delays in announcements had put Scottish growers at an “extreme disadvantage” with regards to greening rules for the next two years.

He added: “The information is being distributed far too late in the year and in marked contrast to 2005, when the roll-out of the SFP [single farm payments] was completed in plenty of time to allow farmers to plan ahead and we were not receiving the information after autumn cropping plans had been made and, in some cases, crops themselves had been established.”