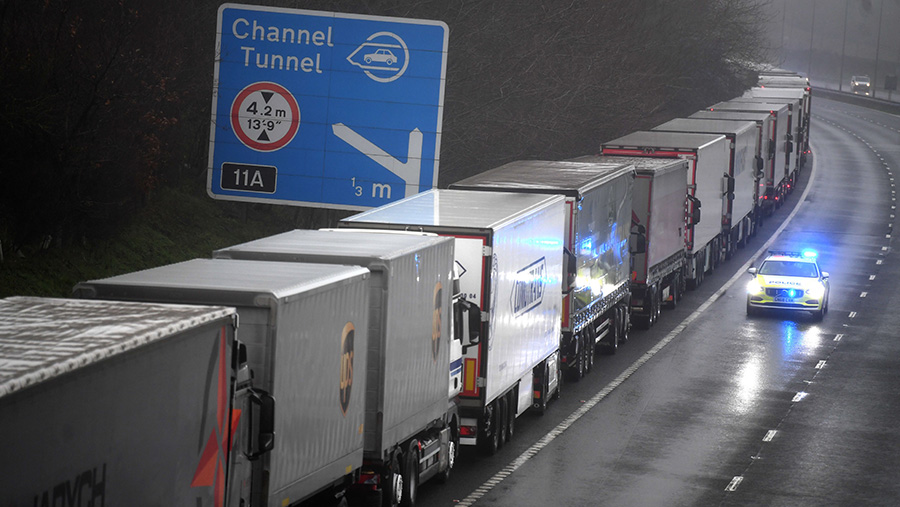 Food worth millions of pounds is starting to spoil in lorries because the UK border with France remains closed, say industry leaders.

Some 1,500 lorries remain stranded in Kent, 36 hours after France shut its border to freight traffic from the UK, says the Food and Drink Federation (FDF).

The border closed at 11pm on Sunday 20 December after a new virulent form of coronavirus was identified across much of south-east England.

“It is imperative that a solution is found – today – to this issue,” said FDF chief executive Ian Wright, who will give evidence to MPs today (Tuesday 22 December).

About half of the UK’s food is imported at this time of year – but the ongoing disruption is affecting trade in both directions.

Mr Wright said there were no concerns about food supplies over Christmas, but some fresh food shortages were likely from next week unless the situation was resolved.

“We must also recognise the terrible toll being taken on UK food exporters and on hauliers,” he said.

“Lorry loads worth millions of pounds are being spoiled. For most, insurance will not cover these losses, which must be compensated.”

Much of the spoilage is believed to involve Scottish seafood, but imported fresh produce and exports of red meat are also being affected.

“The clock is ticking for that product to survive these delays. We estimate there will be more than £5m of Scottish food that would be been heading into France daily this week.

“The timing of this could scarcely be worse for many businesses.

“There are critically important markets scheduled for Wednesday in France and Spain as part of the big pre-Christmas sales rush.”

Neil Wilson, executive director of Scotland’s Institute of Auctioneers and Appraisers, said the situation would affect demand for produce and market prices.

“The impact of the EU border restrictions over the past 24 hours, as well as what might follow with Brexit, will no doubt drive some volatility within the industry.”

The reduced number of livestock sales over the Christmas and New Year period could help limit any drop in price and steady up volume, suggested Mr Wilson.

Despite the pandemic and Brexit uncertainty, prime and store lamb prices had remained buoyant during the year, so an element of confidence remained in the sector.

“Right now, we are in a very frustrating place,” said Mr Wilson.

“Our advice for farmers is to stay in touch with their local auction marts and auctioneers, who will do their best to guide you through the uncertainties that the start of 2021 is inevitably going to bring.”