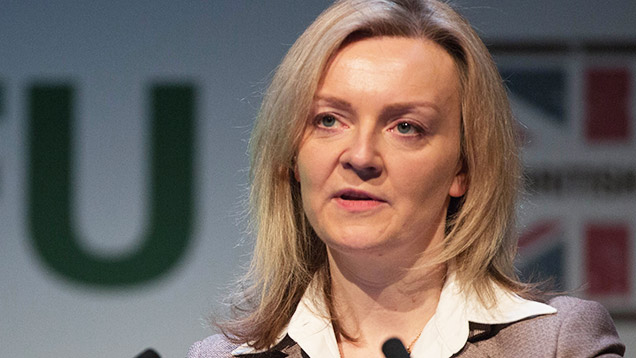 Defra secretary Liz Truss has set out a four-part plan to grow and create jobs in food and farming.

Ms Truss outlined the long-term economic plan in a speech at the NFU annual conference in Birmingham on Tuesday (24 February).

The four priorities are:

Ms Truss said she was also keen to see EU regulations simplified to free up food producers to innovate and grow their businesses.

“Britain’s food and farming industry is a powerhouse of our economy – contributing £100bn each year and employing 1 in 8 people – and has huge potential to deliver further jobs and growth.

“Our long-term economic plan for food and farming will unlock the potential of this vital industry.”

Ms Truss said she wanted to encourage more skilled people into the industry by increasing apprenticeships and working across the food supply chain to improve skills.

She said she wanted to help farmers and food businesses deal with global market volatility, such as exploring the feasibility of a futures market for dairy products.

On red tape, Ms Truss said Defra was on course to cut guidance by 80% over the course of this parliament – and had already cut 34,000 farm inspections.

The government had opened more than 600 new markets – and was focusing on the most lucrative opportunities such as trade with China and the US.

On simplifying EU rules, Ms Truss said Defra had told Brussels that decisions on pesticides must be proportionate and based on science to avoid holding back the competitiveness of our arable farmers.

Europe should also embrace scientific advances such as GM, she added.

Defra was working with EU farm commissioner Phil Hogan to simplify the CAP and a list of practical proposals developed with the farming industry were being presented to Brussels.

Ms Truss said it was important to uphold the country’s “world-class system” for protecting the country against animal disease.

The number of frontline vets needed to protect farm businesses from animal diseases had been maintained and the government was committed to eradicating bovine TB by 2038.

Ms Truss said: “This government believes in food and farming as a core part of our economy and our national life.”

“We are prepared to do what it takes to make sure it has a great future in Britain.”