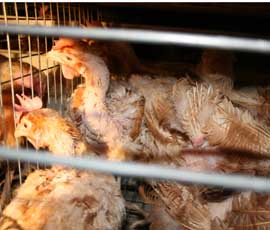 Egg producers and animal welfare bodies have expressed their surprise and disappointment at news there are still as many as 30 producers using conventional cages in the UK, housing an estimated 300,000 hens, and called for the units to be closed as soon as possible.

The news emerged at a meeting of animal health experts in Brussels this week, where UK representatives had to tell their EU partners the UK was not 100% compliant with the Welfare of Laying Hens Directive banning conventional cages from the start of the year.

Government inspectors have discovered a small number of producers not complying with the regulations, obliging the EU Commission to add the UK to the list of 14 countries not meeting the new rules and likely to be subject to infraction proceedings in the coming weeks.

“After continued assurances that the UK will fully comply with the ban on these inhumane cages, we are shocked and saddened to learn that this isn’t the case. The barren battery cage ban was agreed in 1999, there is no excuse for farmers not to have been compliant when it came into force at the beginning of this year,” he said.

Mark Williams, chief executive of the British Egg Industry Council told BBC Radio 4’s Farming Today programme the news was disappointing, but the number of producers still using battery cages is very small, typically operating units of about 5,000 hens. This equated to just 1% of the laying flock, whereas Lion Code producers, accounting for 11.5m hens on some 50 commercial units were fully compliant.

He suspected the last remaining hens in conventional cages were only there because producers had not been able to get them slaughtered in time.

Egg producer Chris Kirkwood of K-Fresh in East Yorkshire – one of the first to convert to enriched cages – said DEFRA should act immediately and shut down any producers breaking the law.

“We have been visited by the BEIC, who have checked that every house we have is compliant with the law and we have also had DEFRA inspectors here checking all our colonies, so I’m surprised anyone can get away with it.

“It does the UK’s credibility no good whatsoever. I can hand-on-heart say I don’t know any units with battery cages, but if there are around 30 farms still operating illegally, then DEFRA must know who they are and they should be closed down tomorrow.”

A DEFRA spokesman, however, said he expected that these producers would either have ceased production or converted by 1 February.

“If they have not, we will issue legal notices and refer the producers to the local council who will consider prosecution.” He added that eggs from these units would not be destroyed, but would be treated as Class B eggs and sent for processing.

BEIC chairman, Andrew Parker, said he was “disgusted” that any producers are still using banned barren battery cages. “It is illegal and is grossly unfair on the vast majority of UK producers who have invested £400m in ensuring that they meet the new standards on time. We urge the enforcement authorities to take immediate action against any non-compliant producer.”

• What do you make of the UK’s small level of non-compliance? Comment below or visit the Poultry Platform