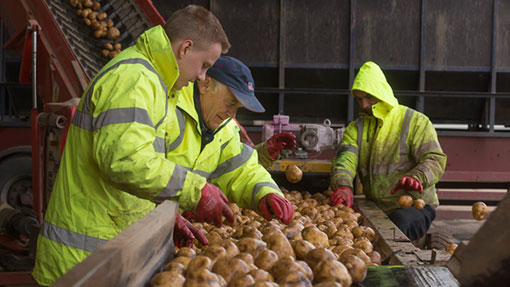 The UK’s self-sufficiency in food has dropped for the third successive year, prompting fresh calls for action to help reverse the trend and increase home production.

The country’s self-sufficiency in food types that can be grown in this country fell from 77% in 2012 to 73% in 2013, according to provisional figures released in the past few days by Defra.

Latest statistics released by the government in its Agriculture in the United Kingdom document show the biggest rise in imports was in grain.

While industry commentators have acknowledged the increase in grain imports was impossible to avoid given the weather, they warn the UK is leaving itself unnecessarily exposed given the challenges of population growth and the risks of extreme weather events around the globe.

Guy Smith, NFU vice-president, said the figures reinforced the message he had been trying to get across for some time.

“We need a culture change in Defra and some of the key agencies like Natural England and the Environment Agency to recognise these figures are serious and to allow us to increase production,” he said.

“How low do we have to go before regulators, opinion formers and policymakers – everyone from Parish councillors through to MEPs talking about the future of the CAP – feel that we have to reverse this trend?”

The government’s reluctance to address the issue of production is in sharp contrast to countries like Ireland, which set out an ambitious plan in 2010 to increase output and exports by 2020.

As a result of the Food Harvest 2020 strategy there has been significant expansion of both Ireland’s beef and dairy sectors.

Mr Smith said the government had made some attempt with the its 2012 Green Food Project but that had been left on the shelf and seemed to have no influence over policy.

He was not necessarily advocating that the UK government should set very specific targets for production as “ if you start to say we need to produce x more tonnes of beef it sounds a bit Soviet”.

However, he would like to see a more strategic plan. “I’d like to see an ambition to reverse this self-sufficiency trend,” he said.

Giving evidence to the environment, food and rural affairs (Efra) select committee in March, farm minister George Eustice claimed he was happy with current levels of self-sufficiency as they were.

“If you look at the longer sweep of history, if you go back to the 1930s, before the Second World War, self-sufficiency at that point was between 30% and 40%. By longer historical measurements, 62% is still quite a high degree of self-sufficiency for the UK,” he said.