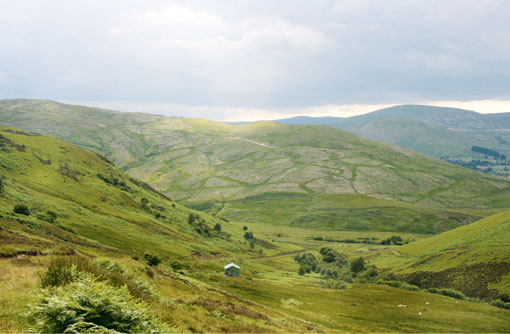 Only sheep farmers in a handful of valleys in the Borders have taken advantage of the recent escalation in hill land values, which were driven up by land-hungry forestry companies. But even that change provoked roars of protest from the sheep industry and local communities and now the Scottish Government is being forced to reconsider its gung-ho planting policy with a more measured response.

You could say that most Scottish farmers just can’t see the woods for the trees.

There are, after all, tens of thousands of acres of boggy, rocky, bracken-infested hill land that’s not much good for growing anything other than conifers. There are also attractive financial incentives in the shape of lucrative Scottish Government planting grants and a guaranteed market for the mature timber in 30 years’ time. Yet across most of the country there’s very little sign of a headlong rush to replace hill sheep with commercial trees.

The reticence of farmers and landowners to commit to long-term timber production is far from new, but it has become a matter of deep concern to Scotland’s £1bn-a-year forestry industry, which is forecasting a shortage of commercial wood for processing in as little as 15 years’ time. Sawmills and ancillary industries have invested heavily in the latest technology and infrastructure yet private commercial forestry companies openly admit they are struggling to convince land managers to turn even the least productive parts of their farms over to trees. The fact that 40% of farmland in Scotland is tenanted is just one of the major stumbling blocks.

Meanwhile, the Scottish Government has set an ambitious target of expanding the country’s forest cover from 17% to 25% by 2025, an objective that set alarm bells ringing in the farming industry and prompted a quick rebuff from NFU Scotland, which is not convinced that having a quarter of the country’s productive land under trees represents the best use of finite land resources.

Former NFUS president Jim MacLaren told a forestry conference there needed to be clear ground rules on when and where planting should take place. “We don’t want to see planting of trees on prime arable land, and planting on our carbon-rich peatlands will not be permitted,” he said. “The result is that any drive for increased planting would be focused on our hills and uplands – the very same land that is the engine room of Scotland’s crucial livestock sector.”

Mr MacLaren’s words fuelled protests in the Ettrick Valley, an area of the Scottish Borders that is already 40% wooded and which appears to be the one district that has fully embraced the drive for more trees. There are reports of the Forestry Commission touting for whole farms here at rates of £1,000/acre for hill land that was previously worth only £300. On that basis it is hardly surprising that five owners quickly sold up and retired. But while the deals may be great for individual farmers, there is concern locally that the loss of so much farmland in one area is having an adverse impact on the community and the landscape.

John Davidson’s family has farmed in the Ettrick Valley for generations and he currently owns the 700ha unit of Crosslea, which he stocks with 1,200 Cheviots and 70 Luing cattle. Climbing to the top of his soft green hill, he points to the scars of ploughed grassy hillsides on neighbouring land that once reared top lambs and voices regret that these acres will never again be productive for farming.

“In some areas, forestry can be a good idea, but it’s a great shame to lose productive sheep units in fragile areas where lamb sales can contribute so much to the whole economy,” he says.

“The long-term impact of the government’s ill-considered policy is that some remote valleys will end up completely unsustainable. Schools will go, communities will dwindle, the village hall will stop being used and we’ll be left with an ageing population, empty farmhouses and nothing but hillsides of trees. Already the government’s policy has had a severe impact on this community.”

Mr Davidson admits he has “done the sums” and could make a considerable profit by selling his farm to the forestry companies that are making active approaches to farmers and appealing to them to sell their land, but he adds: “I haven’t been tempted to sell because I want to farm but I can understand why older farmers reaching retirement age are taking the money. I’m not blaming them but I regret the impact it is having on communities I care about and the fact it is leading to fewer opportunities for young people interested in farming.”

The Ettrick Valley community, along with representatives of the Scottish sheep industry who feared similar blanket afforestation elsewhere, persuaded rural affairs secretary Richard Lochhead to visit the area and see for himself the impact of the conifer planting on hill farms. After witnessing the strength of feeling in the area, Mr Lochhead promised to take action to prevent trees from forcing sheep and families off the hills and uplands and followed that guarantee up a few months later with the announcement that a Woodland Expansion Advisory Group (WEAG) was being created.

WEAG is an 18-strong committee of farmers, foresters, conservation, community and land experts who will identify which types of land are best suited for tree planting in Scotland and how such an expansion of woodland cover should be taken forward. The group is currently taking evidence from all stakeholders and is due to report its findings in the spring.

But such political processes are painfully slow for forestry lobby organisation Confor, which makes no bones about the urgent imperative for new plantings. The organisation’s chief executive, Stuart Goodall, is adamant that he doesn’t want to force people to plant trees or compromise communities but insists 9,000ha of new commercial productive forestry needs to be planted every year until 2020 to maintain sawmills and the wider forestry industry in Scotland.

He says: “Our members are worried there will be a falling away of availability of wood because we’re not planting new forests and we’re actually losing some of them to new wind farms. In practical terms, we need 90,000ha of commercial conifer forestry to be planted over 10 years to allow the sector to overcome the problem.”

Mr Goodall insists there is a considerable quantity of land that is marginal for agricultural production but ideal for trees, and which could be financially attractive for farmers to plant.

He adds: “Obviously, each farm needs to be looked at on its own merit. We need to understand the type of farm, the type of land and the local markets for timber. Having a forest would be cash positive during the early years and there would be a big capital sum after 30 or 35 years. It would bring in an awful lot more than sheep farming but I recognise there wouldn’t be the same annual income over all those years.”

However, the most difficult job appears to belong to people such as Colin Kennedy, associate director of the private commercial forestry company Scottish Woodlands. He tries to interest landowners and farmers in forestry opportunities and describes his current role as “extremely challenging”.

“It’s a challenge because farmers look at annual income and are conditioned to sell produce year-to-year. They look at what single farm payment will bring in and trying to persuade them to plant trees, which are a long-term land use change, is a very difficult matter. The grants are good but 40% of farmland is tenanted and tenants need their landlord’s permission to diversify into trees,” he says.

“We simply appeal to farmers to look at their land. We’re not looking for the most productive acres that produce crops or beef or sheep, but on every farm you’ll find wetland, rocky ground or bracken areas that are not producing much. However, in 99 out of 100 cases it would grow very good trees.”

Mr Kennedy believes, however, that to achieve government forestry targets there needs to be more joined-up thinking between agriculture and forestry grants.

He adds: “The grants schemes need to be incentivised so they’re attractive enough for a farmer to put part of his land into trees and continue farming efficiently on his best land. At the moment that’s not happening, and if the Scottish Government isn’t looking at why it’s not happening, they need to do so soon.”

The general message from the forestry industry is that future land use should not be a choice between farming or trees, renewables or conservation, rather all can be accommodated if the policy framework that drives land use decisions can only be more coherent and more integrated.

However, the harsh reality is that farmers will make land use decisions largely on the basis of economics, and the long-term security of the forestry industry will ultimately depend more on the fluctuating fortunes of the British sheep industry than any recommendations from the Woodland Expansion Advisory Group.