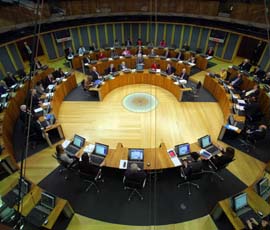 Wales will no longer have a minister dedicated to rural affairs after a decision by the newly-elected Labour Welsh Assembly Government.

Instead, the Welsh cabinet position will be known as environment and sustainable development minister – a role filled by John Griffiths, assembly member for Newport East.

The rural brief will be picked up by his deputy, mid and west Wales assembly member, Alun Davies, who will be referred to as deputy minister for agriculture and fisheries.

Alun Davies was elected to the National Assembly in May 2007.

After graduating from the University College of Wales, Aberystwyth, he was elected president of the National Union of Students in Wales, where he led campaigns against the then Conservative government’s cuts in education funding.

Following this, he worked as a campaigner for the World Wildlife Fund and Oxfam on international environmental and poverty issues.

Before becoming an assembly member, Mr Davies was a public relations manager with the Welsh multi-utility, Hyder plc, before being appointed head of public affairs at the UK Atomic Energy Authority.

Following this he was appointed to the board of S4C as its director of corporate affairs. Prior to his election Mr Davies was managing director of his own business, Bute Communications.

The cabinet shake-up marks the departure from the cabinet of Ceredigion’s Plaid Cymru assembly member, Elin Jones, who was the rural affairs minister under the Labour-Plaid coalition.