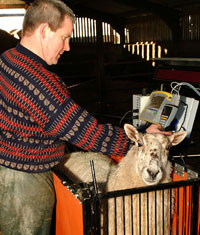 Farmers in Wales have made it clear that they are ready to demonstrate over the electronic identification of sheep.

NFU vice-president Paul Temple said he would convey to Westminster and Brussels the full weight of the anger and frustration over EID after his meetings with producers in Mid Wales and with NFU Cymru’s Welsh Council.

“You can see the willingness that these farmers have if we wanted them to demonstrate,” he said.

“You can see the willingness of the farmers to try to explain how it might affect their production.

“This is a classic regulation where you can find many thousands of small farmers thinking this is one piece of regulation with which I’m not going to comply and that’s not what it should be about.

“If we are going to demonstrate it’s got to be in the right place at the right time with the right kind of message.”

Mr Temple said it was his job now to pass on to DEFRA and commission officials the strength of feeling he had picked up in Wales.

The NFU would make the best use of the anger and frustration among sheep producers to get across the level of feeling.

“We shall warn ministers that there is a real feeling of frustration and anger at a piece of useless regulation when the government is challenged to have better regulation,” he added.

“We want to tap into that strength of frustration and use it in the right way to reinforce what we are saying.”

NFU Cymru president Dai Davies said Welsh farmers were prepared to demonstrate because they were so frustrated at the lack of action, the lunacy of the scheme and the fact their businesses would not be able to support it.

But he warned that there was no point Wales standing alone and any demonstration in Brussels would have to draw on the increasing support from other European countries to have the right impact.