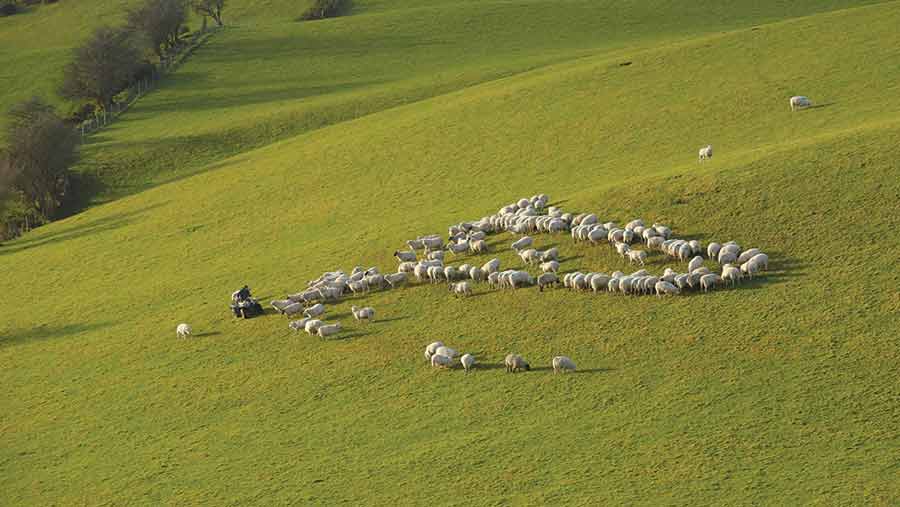 Farmers are still waiting for basic payments in Wales, but the Welsh government insists those payments are not late, reports Debbie James.

Farmers in Wales are mounting pressure on the government to release unpaid subsidies without delay – warning that further hold-ups will have the dire consequences for their businesses and the wider rural economy.

Two-and-a-half-months after the Basic Payment Scheme payment window opened, around 17% of Welsh farmers have still not received their subsidy.

The Welsh government said the £108m paid to 12,853 farm businesses by Friday 12 February, exceeded its target. But this is little comfort for those still waiting.

Livestock producer Huw Davies, who farms 320ha (800 acres) on two separate holdings near Newcastle Emlyn, has received 80% of his BPS for one 400-acre holding but he fears it could be at least two months before he gets paid the sum due on the second holding.

This claim is subject to a penalty notice following an inspection in August 2015. Mr Davies is angry that although the breach was rectified in the same week as it was flagged up, it wasn’t until 21 January that he received a letter from the government advising him that he would have 60 days to appeal.

“I needed to do some work on a footpath that hadn’t been used for 40 years. I got this done in the same week as the inspection and informed the inspector by telephone. Why did it take five months for the government to get in touch? This is now going to extend the process to the end of March and possibly beyond.”

Mr Davies admitted he is better off than many farmers because he has received his BPS for 160ha (400 acres) at Trefaes Farm but his cashflow is relying on the subsidy due on his second holding.

“Our main business is selling store cattle and we need to buy in to keep the cycle going. It has to be a continual cycle as there is very little margin. We have just received a big feed bill and we have wages to pay. Does the Welsh government want the agriculture industry in Wales to survive or not?”

The Welsh government said its staff had been working weekends since July to process payments.

Dairy farmers Philip and Helen Davies were among those fortunate to receive their BPS when the payment window first opened in December.

They said it would have been a financial struggle if this money hadn’t been forthcoming because they had invested heavily in converting to dairying from livestock production.

The BPS ensured they could keep up repayments on the substantial bank loan they secured to establish the new dairy unit at 190-acre Maesneuadd Farm, near Pontrobert, Powys. “We are spring calvers so we won’t have any income until we receive our milk cheque next month,” said Mr Davies.

For farmers who have yet to be paid, some banks have been supportive. HSBC regional agricultural director Euryn Jones said a number of the bank’s farmer clients had been offered a capital repayment “holiday”.

Unions have been keeping up pressure on the Welsh government to speed up the payment process. NFU Cymru president Stephen James said at the very least farmers should be given guidance on when they are likely to receive their cash.

But the government said such a move would divert staff from processing claims. “They wouldn’t be able to provide more information to what farmers may obtain from the Customer Contact Centre, whose staff are specially trained to assist in these matters,” said a government spokesperson.

For farmers who are appealing against cuts to the area they are claiming entitlements on, the next big worry is whether their appeals will be heard before the 15 May submission deadline for their next Single Application Form.

John Crimes, of Cymru Agricultural & Rural Advice (CARA), said he could see no guarantee that appeals would be heard by 15 May. “This may mean for some that if they lose their appeal and have entered the same land, or part of that land again, their penalty will be doubled as intentional error.

“My advice is that unless the assembly is forthcoming on why they have deducted the land, and farmers believe they are correct, then claim it. The implications of not doing so could last for several years in reduced payment receipt.”

Farmers who have yet to receive their BPS can expect no interest on the sum outstanding. “As these payments are most definitely not late – the payment window opens from December to June – there is no interest to be accrued,” the government spokesperson confirmed.