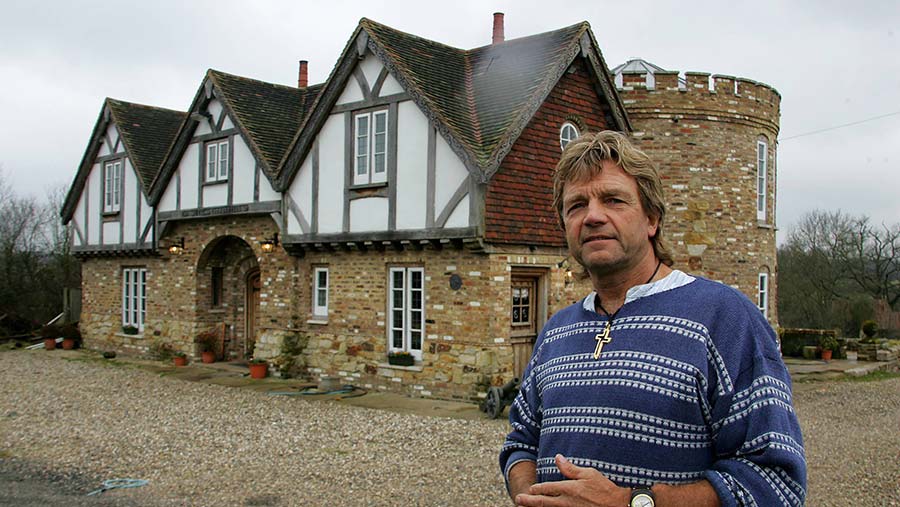 A farmer who built a mock Tudor castle without planning permission has begun demolishing the property to avoid going to jail.

Robert Fidler hid the castle behind bales of hay after building it on Surrey greenbelt without permission from his local council.

But after a nine-year battle with Reigate and Borough Council, which landed him in court, Mr Fidler has decided to tear down the property.

He told Farmers Weekly: “I don’t have a lot of choice. Either that, or they put me in prison, or do it (demolish the castle) themselves.”

When asked whether he thought he had been unfairly treated, he said: “It is a waste. I have never broken any laws.”

Mr Fidler, 67, built the four-bedroomed property at Honeycrock Farm in the village of Salfords, in Surrey, in 2000 without planning permission. While the property was being built, it was concealed behind hay bales.

However, planning officers from Reigate and Borough Council discovered the building in 2007 and ordered its demolition.

It is a waste. I have never broken any laws Robert Fidler

Mr Fidler failed to comply with enforcement notices to pull down the property, so the council started contempt of court proceedings against him.

Last year, a High Court judge ruled that if he didn’t comply with the order by 6 June 2016, he would face a three-month jail term.

Earlier this week, photographs published on national newspaper websites showed Mr Fidler removing tiles from the roof of the castle as part of the early stages of demolition work.

In a statement, Reigate and Borough Council said: “Mr Fidler hasn’t made us aware that he is demolishing his unauthorised dwelling but if this is the case we are pleased that he appears to be complying with the instructions of the court.

“It is in Mr Fidler’s interests to demolish by 6 June, as the High Court judge ordered that he will likely face a prison term if he doesn’t.

“We have already given Mr Fidler advice about the options available to him for providing alternative accommodation in existing lawful buildings on his site.”