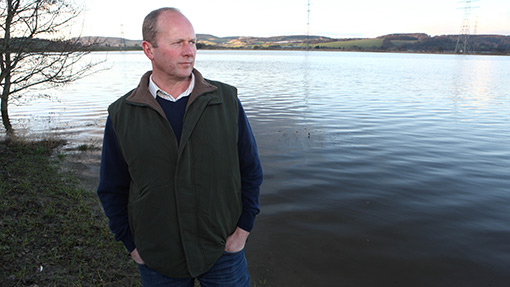 A farmer has been left facing more than £450,000 of costs in lost income and repair bills after a smashed sea defence allowed flood water to devastate his land.

The defences, at David Hay’s Easter Rhynd farm in Perthshire, were breached in the winter storms. Twice a day since the beginning of January, a surging mass of sea and river water has flooded through the gaping 50m hole to drown some of Scotland’s most fertile, stone-free soil.

See also our coverage of the winter floods

The farm is bordered by the rivers Tay and Earn and grows potatoes for Tesco and Sainsbury’s, but at high tide the river Tay pours through the gap to swamp 140 acres of its prime alluvial acres under 10ft of water.

The land was sown with winter wheat and ploughed for potato production last autumn and predicted to gross £250,000 this year, but farmer David Hay has had to write it off as a total loss. 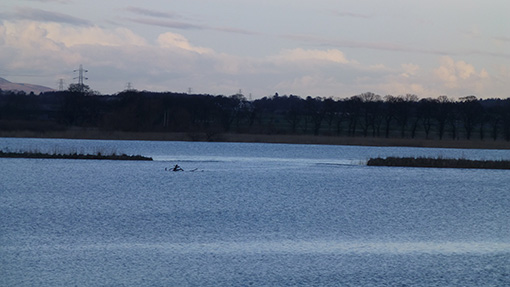 “Not only will we lose the revenue from these fields but the estimate for repairs to the flood defences is about £200,000,” he says. “We’re also looking at the loss of topsoil, the leaching of soil nutrients, debris being washed up and an increased disease and weed risk.

“Repairs to the bank can’t start until May, when the tides are lower, and the challenge will be closing the gap and making it secure between tides,” said Mr Hay. He said it would take 7,200cu m of material to restore the banks to their former condition. The breach occurred at the point where the Scottish Environment Protection Agency (SEPA) halted restoration work being carried out by the Hay family in the late 1980s. SEPA had issues about the materials being used.

NFU Scotland president Nigel Miller visited the farm this week to watch as one of the highest tides of the year flooded across the land. He said the flood damage that’s taking place in Perthshire and Dumfries and Galloway is as severe as any that has affected English farms this winter and said farmers should have the ability to use “the complete flood management toolkit”, including the removal of silt.

He added: “On the Tay and in Dumfries and Galloway it is clear that engineering flood prevention measures that cater for extreme events is crucial.” And he called on the Scottish government and SEPA to meet the union to discuss “more robust resilience measures”.

The union is funding an independent expert in flood prevention to work on case studies and assess the best defences and engineering solutions to flooding issues.