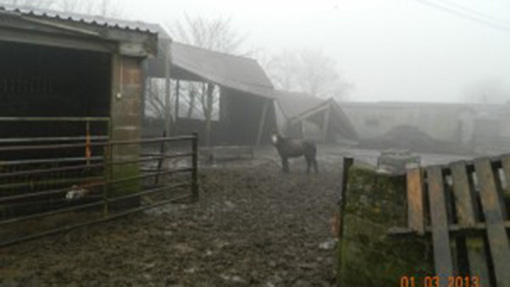 A farmer who left livestock in squalor and rotting carcasses on his land has been banned from keeping animals for life.

Philip Govier, 69, allowed the carcasses of dead farm animals to be eaten by dogs and predators.

And he left his cattle in such filthy conditions that they developed inflammation of the skin.

Mr Govier, of Willtown Farm, in Clayhidon, on the Devon/Somerset border, pleaded guilty to 14 offences of animal neglect.

He appeared at Exeter Crown Court on Monday (19 May) and was sentenced to 12 months in prison, suspended for two years.

The court heard that officers from Devon and Somerset Trading Standards found rotting remains of sheep, cattle and a horse on his land – and live animals at risk of injury from exposed barbed wire and rusting sheet metal.

The farmer’s dogs were found feeding on remains of one of the sheep.

Mr Govier, who has a history of animal welfare offences since 2009, repeatedly ignored advice given to him by trading standards officers and other officials concerning the welfare of his animals.

His farm had become unmanageable and was in a state of disrepair, with animals kept largely in squalor.

David Evans, defending, told the court that Mr Govier had struggled to keep livestock after he suffered a kidney infection after he was gored by an animal in 2009. He also suffers from arthritis and needs a hip replacement.

Mr Govier was sentenced at Exeter Crown Court for offences under section 9 of the Animal Welfare Act 2006 for failing to provide an adequate environment for his livestock, which in April 2014 included approximately 30 cattle, 200 sheep and 90 horses and ponies.