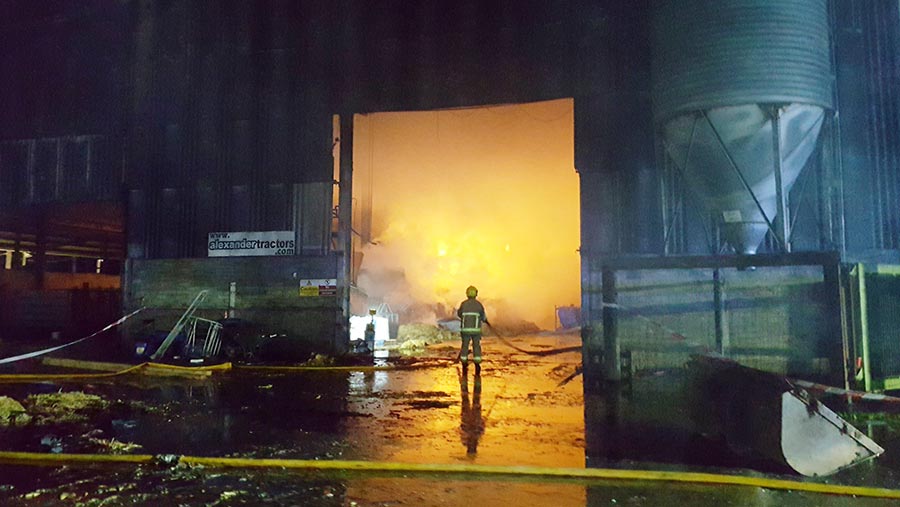 A beef and sheep farmer in County Antrim says he has lost his entire winter supply of straw after a fire engulfed one of his sheds on Sunday evening (5 November).

The alarm was raised by a farm worker on James and Nelson Alexander’s farm on the Gloverstown Road near Toomebridge at around 8.30pm.

The Alexanders operates a large beef and sheep farm, as well as a used tractor and farm machinery sales business.

In the shed were hundreds of tonnes of straw that the Alexanders bought in August to feed their cattle and sheep through the winter.

Some farm machinery, including a Manitou telescopic loader, a straw chopper and sheep handling equipment were also destroyed in the blaze.

However, James says he was lucky no livestock were killed.

“Our farmworker alerted us to the fire around 8.30pm. We rushed to move some cows and calves from an adjacent shed in case the heavy smoke choked them.

“Within minutes the fire had spread throughout the pile of big straw bales we were storing for the winter.

“We called the fire brigade, who were here within 15 minutes and battled the flames for 20 hours before it was put out.”

The farmyard is monitored by CCTV and the police and the fire service are still investigating what could have caused the fire.