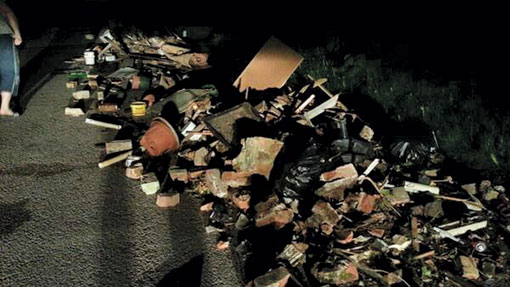 A farmer has spoken of his fly-tipping nightmare after the latest incident blocked his farm driveway with a pile of building rubble.

Andrew Pimbley, managing director of Claremont Farm, on the Wirral, said fly-tippers were now targeting his farm on average two or three times a month.

The most recent incident, on Tuesday night (6 May), saw building waste, including rubble, bricks and concrete, dumped on his farm entrance after dark.

Mr Pimbley said he heard the waste being tipped, but by the time he made it to the scene, the offenders had left.

The farm is situated just two minutes drive away from a household waste recycling centre.

But Mr Pimbley said he was being regularly targeted because fly-tippers “could not be bothered” to pay the £80 fee to dispose of the waste correctly.

A week earlier, on 28 April, he said he witnessed a white Ford Transit tipper dump waste on his farm in the dark.

He recorded the first four letters of the van’s number plate – FM03 – and went off in pursuit of the vehicle, but lost it after it jumped two red lights.

Mr Pimbley reported the incident to the police who have told him they know the suspect, yet they cannot act unless he provides the full registration number of the vehicle.

“It’s a ridiculous situation. I believe the same person carried out both offences, but the police said they can’t do anything unless I give them the full number.”

The farm has diversified and is about to open a farm shop with café. It will also host a new food and drink festival on 25-26 May.

Mr Pimbley said the farm’s location near the motorway makes it an “easy hit” for fly-tippers.

“Because we are so close to the motorway, it is easy for people to jump on and off, do a quick scan and dump their rubbish,” he added.

“It’s so dark and these tipper trucks can drop off their rubbish and vanish in a matter of seconds. We feel powerless to stop them.”

The farm is now being targeted almost weekly, Mr Pimbley said, with everything from building waste, mattresses, doors, old beds, sofas and washing machines being dumped.

“There’s not a field left on the farm where we haven’t had to clean up fly-tipped mess,” he added.

“The police are telling us it’s not a criminal offence and it is a civil matter. But the fact that it becomes our problem when it’s on our land is very frustrating.”

A spokesman for Merseyside Police said fly-tipping was “not a criminal matter”.

A spokesman for Wirral Borough Council said: “We are taking this fly-tipping incident very seriously and are in the process of investigating. The material has been left on the highway, so we have asked the council’s contractors Biffa to remove it as a matter of urgency.