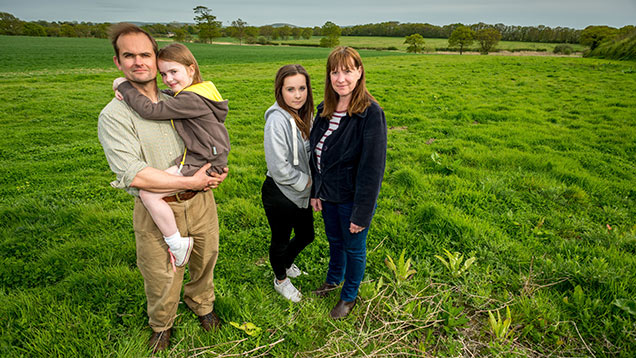 A farmer has turned down the chance to become a multi-millionaire after rejecting a £275m offer for his land from developers.

Robert Worsley, 48, was offered the staggering sum of money if he agreed to sell his 220ha (550 acre) farm in West Sussex – about 100 times the value of the land.

Housing developers Mayfield Market Towns want to use the land as part of a project to build 10,000 new homes.

But father-of-two Mr Worsley has politely rejected the offer, explaining the development would “diminish the joy of the countryside” for many people.

He said has owned the land for 15 years, but developers had been contacting him over the past couple of years to try to convince him to sell up.

Mr Worsley’s uncompromising stance has frustrated developers but delighted green campaigners who are concerned that large swathes of the county could be turned into huge housing estates in a bid to plug the acute shortage of rural homes.

“I hope I am speaking for an awful lot of people who would have their quality of life diminished.”

He added: “Long after I have gone, Sussex will be spoiled. I will be one of the architects of that and that is what I want to resist.

“I thought the money involved might eclipse a lot of people’s judgment. But not so.”

Other landowners on adjoining sites in Twineham, near Haywards Heath, West Sussex, are believed to have been offered large sums in exchange for their farmland.

“I thought the money involved might eclipse a lot of people’s judgment. But not so.”
Robert Worsley, Sussex farmer

A statement on the Lambs website said: “Mayfield Market Towns is not wanted by local people, councils or MPs.

“It has also been rejected by the Government Inspectorate. But this company just won’t admit defeat – why? Because Lord Taylor, Peter Freeman and his fellow Mayfield directors stand to make billions.”

Sir Nicholas Soames, Conservative MP for Mid Sussex for the past 18 years, has been battling against Mayfields’ proposal since it emerged two years ago.

He said the proposal was a “bloody awful, stupid thing to do” and was confident that it has no hope of ever succeeding under current planning laws. He has pledged to continue his fight to see it off for good.

However, a spokesman for Mayfield Market Towns insisted that the site, which falls across the Horsham and Mid Sussex districts, has been identified as suitable for development.

“There is a huge shortage of housing in this region and we believe that delivering these new homes in the form of a new town, with all the proper infrastructure and facilities in place, is a much more sustainable alternative to add-on development in and around existing towns and villages.”