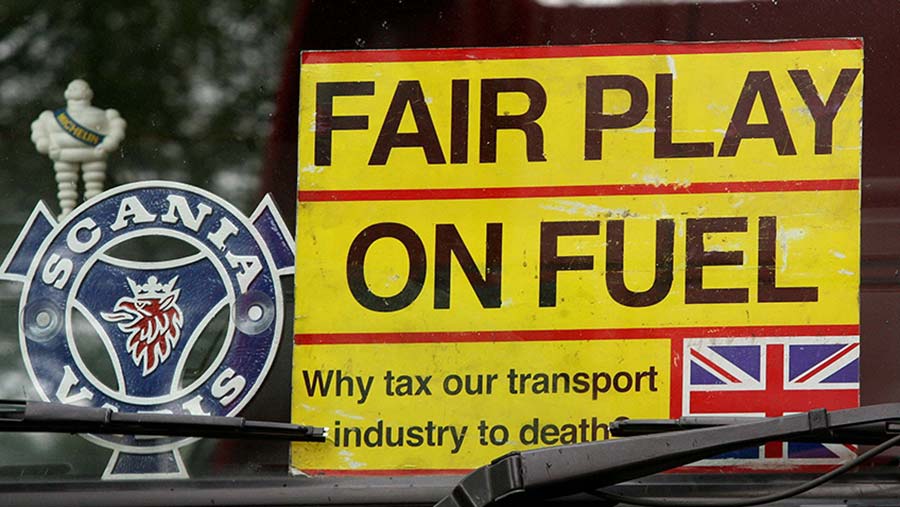 Farmers and hauliers are threatening protests over the rising cost of fuel and the disparity between crude oil and pump prices.

The farm lobby group Farmers for Action (FFA) said the increasing cost of diesel was having a “massive effect” on the haulage industries, with knock-on effects for farming.

FFA members held a meeting on Monday (22 October) and its chairman, David Handley, said a great deal of discussion took place about the possibility of protests.

See also: Video – petrol or diesel UTVs: which are best?

Those present included a number of original farmer members who took part in the September 2000 fuel protests, in which British farmers and hauliers launched a dramatic campaign of direct action over high fuel prices.

“The government has frozen fuel duty again, but some FFA members think it could have cut it,” said Mr Handley.

“But why is it when we see crude oil prices steady, or in some cases reduced, that we are seeing some companies like Shell massively increase their prices at the pump?

“At one end of the village, diesel is 139p/litre, but three miles away it’s 142p/litre. Yet the same company is charging 162p/litre at a motorway service station.

“I certainly think that the oil companies have got to be targeted.”

Mr Handley said FFA members have been tasked to go out and get more information on pricing and report back their findings.

From a farming perspective, Mr Handley said rising fuel prices were having an impact on the cost of transporting straw.

Fodder is in high demand after the dry summer limited grass growth on farms and hit winter supplies.

Luke Bosdet, AA fuel price spokesman, said the rising cost in the wholesale price of diesel was the main reason for high prices at the pump.

“We have had a rapid increase in the wholesale price of diesel, which is out of the control of the government,” he explained.

But Mr Bosdet said the government needed to address “a lack of transparency” between the oil price and the pump price.

The RAC said the average price of diesel at motorway service stations is 155.16p/litre, compared with 133.45p/litre at forecourts from the four main supermarket retailers (Asda, Morrisons, Sainsbury’s and Tesco).

“If you live in a rural area, there’s no doubt you have to pay more for your fuel, unless you choose to drive miles to find the nearest supermarket forecourt,” said RAC fuel spokesman Simon Williams.

“But the issue of motorway service station fuel prices is something transport secretary Chris Grayling should take a look at.”