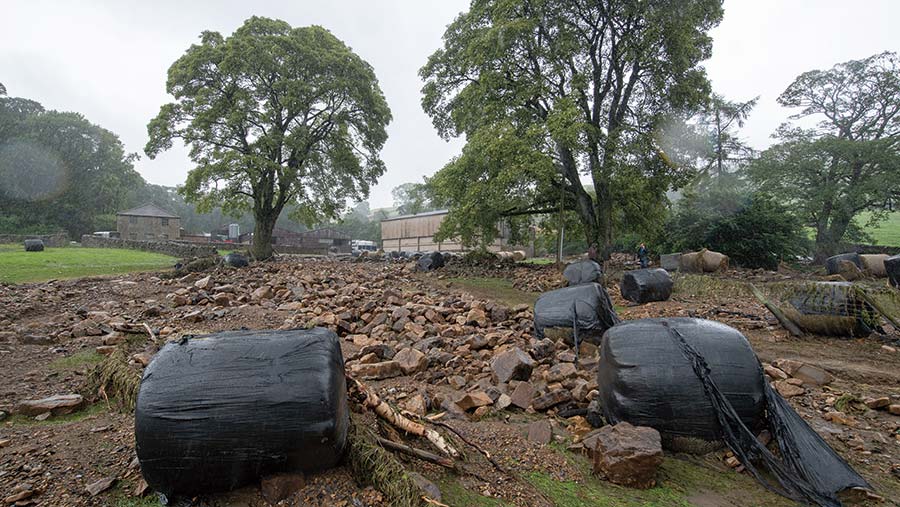 Industry leaders have called on the government to set up a recovery fund after flash floods devastated farms in the Yorkshire Dales.

Dozens of farms are counting the cost after up to 113mm of rain fell in just three hours on 30 July – drowning sheep, destroying dry stone walls and sweeping away bridges, roads and trackways.

“It ran like a river and ended up a mile away – it was unbelievable,” he said.

The cost of the flash floods is expected to run into millions of pounds. Many farmers face hefty bills to rebuild walls and remove stones and boulders from fields and grazing land.

One of the worst affected farms is believed to have lost 160 sheep.

Mr Barker was among 30-40 farmers able to meet representatives from the Rural Payments Agency, Natural England and the Environment Agency, alongside farming charities, at an emergency drop-in centre at Leyburn auction mart on Wednesday (7 August).

Local NFU Mutual agent Lindsey-Anne Murfin, who co-ordinated the drop-in centre, said the rural insurer had received almost 200 claims as a result of the flash floods.

“We need to know what will be done, who will do it and who will meet the cost,” she said.

They have urged the government to set up a farm recovery fund and fast-track payments to help affected farmers clear up the mess and get their businesses back on track.

Laurie Norris, NFU adviser for the North Riding and County Durham, said: “Defra says it needs evidence of how farmers have been affected, but we need action now.

Farmers’ needs must not be allowed to drop down the importance list.”

Emergency derogations are being sought so that affected farmers are not penalised for being unable to meet their environmental stewardship obligations.

But local business leaders have voiced concern about the impact on the wider rural economy too.

David Kerfoot, chairman of the local enterprise partnership, said the iconic dales landscape of dry stone walls – created by generations of farmers over the centuries – was a unique and distinctive backdrop that attracted millions of tourists – and must not be lost.

A spokesman for Richmond MP Rishi Sunak, who is also chief secretary to the Treasury, said he was liaising with all relevant government ministers to access funding.

Getting the farming community back on its feet was Mr Sunak’s “number one priority”, he said.

How to get help

All affected farmers, both members and non-members, can call the NFU national CallFirst number – 0370 845 8458.

The dedicated CallFirst team is collating details of members and non-members to keep farmers up to date with the latest developments.